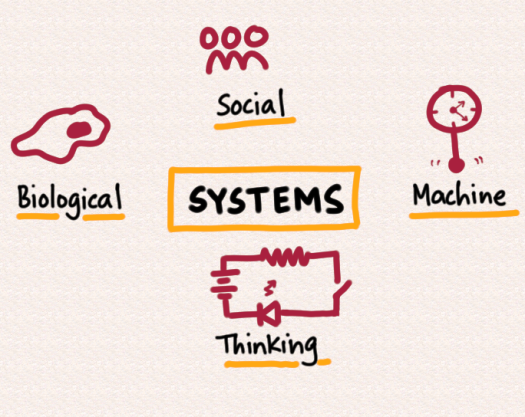 The way to build a complex system that works is to build it from very simple systems that work. – Kevin Kelly

One of the amazing things about the Internet is that things that were lost are finding a new lease of life. The Open Library, for example, will introduce you to books that you won’t find in your library or on Amazon. And YouTube lets you see things like this lecture from Russell Ackoff which gives you a logical proof for the existence of God.

Then replaces one God with another.

One of the things he talks about is the concept of systems. Many people argue about this, especially on social media so it’s useful to reflect on Ackoff’s definitions of systems.

First there are machine systems, things like planes, trains and automobiles. These are mechanical and operate in known ways, what they will do is entirely predictable. A clock will tell the time, now and in the future, in the same way. In fact people thought of the universe as a machine for a long time and if there is a machine there must be a maker, therefore there is a God.

Then we have biological systems, of varying levels of complexity – amoebas to animals. These differ from machines in that their behaviour is not always predictable, they have a purpose, which in many cases is to survive and reproduce.

As creatures get more complex and get bigger brains, you get social systems that emerge from interactions and behaviour. Humans have very complex social systems, which include things like financial systems and healthcare systems, but we shouldn’t forget that bees have social systems as well.

Then Russell pointed out that we’ve been creating a new kind of system, Early machines did things, but then we added the ability for sensing and feedback and started making machines that responded to their environments. I don’t understand this concept entirely but heard the term “Thinking” machines. I think this refers to the ability for a machine to sense its environment and change its behaviour – imagine your automatic vacuum cleaner or a self-driving car. These are doing things that look like thinking, observing and changing behaviour after working out what to do.

Leave the last type of system for a bit, it probably needs more time to really understand. The mistake we make is that we confuse the way to think about one system with a way to think about the others. Machines are great for what they do. If you want to make things efficiently using machines you need to think in one kind of way. The same way, however, will not be useful if you think about social systems. For example, in Western societies, there are few people and so they use lots of machines. In poorer countries there are lots of people and using machines would put them out of work. Someone who believes that it’s more efficient to use a machine to make a road may not notice that it’s not efficient to put people into poverty at the same time.

We also make the mistake of thinking about biological systems as applicable to everything else. We see nature “red in tooth and claw” and imagine that competition is the way things are – we must compete in order to survive. But a social system is about more than that – it can be about cooperation and care rather than control and power.