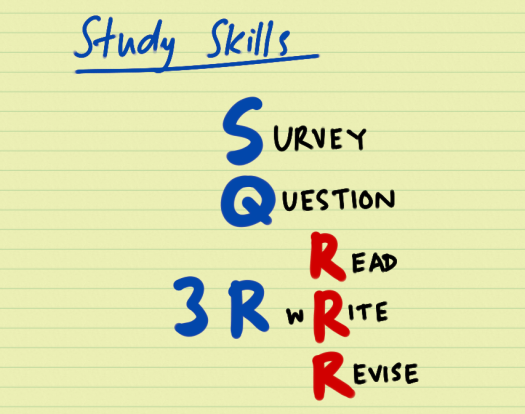 As engineers, we were going to be in a position to change the world – not just study it. – Henry Petroski

I should, in theory, be starting a programme of research soon and I’m wondering how to use this blog to help me with the next six or so years of study that I’m going to have to do.

A memory of study skills from a few decades ago came back to me recently. You might have heard of the SQ3R method. It stands for survey, question, read, write, revise. The idea behind this approach is to stop doing the thing we all think we have to do when dealing with learning material. We think we have to start at the beginning and then go through methodically until the end.

The SQ3R method says that a better thing to do is first skim through the chapter or paper you’re trying to read. Look at the headlines, the first sentences – get a feel for what is going on. Then turn to the end and look at the questions that have been posed. Or, if there aren’t any questions put down a few that come to mind. Then it’s time to read the whole thing, then go through it again, this time making notes. And then, perhaps after some time, go back and revise your notes.

I used this approach quite a bit through my first degree – less during my second. In the first, I took notes so that I could remember things and write them down in exams. For the second I didn’t have time – but it didn’t matter as much because I was more interested in the subjects. So I read widely, and some of that stuck. And I made sketchnotes – and that helped to remember the big ideas. And I did make concept maps that helped me memorise big chunks of content that were likely to be needed in exams.

So, I did a lot of surveying – lots of skimming and looking and flicking through material. And I did drawing – visual approaches to capturing information so that I focused on the important bits rather than trying to memorise lines of text.

What I’ve learned after all of this, however, is that all my studies so far have been about seeing what is already out there. The material exists and I’m trying to remember it so that I can write it down for a paper or exam. That’s not the same as understanding it.

That requires a deeper level of engagement with the subject. I’ve done some of that with this blog – taking a particular idea or concept and turning it into a model, or creating a visual and then having a look at what I think about that idea using this medium of text and a monologue. Thinking, some people say, is simply talking to yourself.

That’s ok – I might think (write) about an idea, and part way through get bored and move on to something else and fail to actually reach a conclusion or wrap it all up with a neat takeaway. That’s fine – it’s a way of engaging with the material. But it’s not particularly critical.

And critical thinking is what I need to develop a bit more. I need to take an idea or a lesson or a paper and break it down – understand the pieces that are there and express them in my own words. Or better yet, teach them. And that’s going to take work because now I have to do the SQ part – survey and question the material. Then I have to read and take notes and then go back and pull out ideas and concepts from those notes and try and make sense of them, questioning and comparing and relating the ideas to other ones. I need to be more rigorous about my approach to learning.

And then I need to try and teach them, putting them back together in a way that each part is an understandable chunk while making sure that the parts fit together to make a sensible whole. Which is pretty much the essence of systems thinking and the area of research that I’m interested in pursuing.

I understand that there are 30 or so approaches, a number of authors and lots of disagreement over what works and what doesn’t and if it matters at all.

I’m not sure how it will all work out but I think I’m going to try and experiment with reading and note taking in the next few posts – seeing how I could use this writing time to pull out ideas from a chapter and make enough sense of them to be able to teach them to some extent.

We’ll see how that goes…