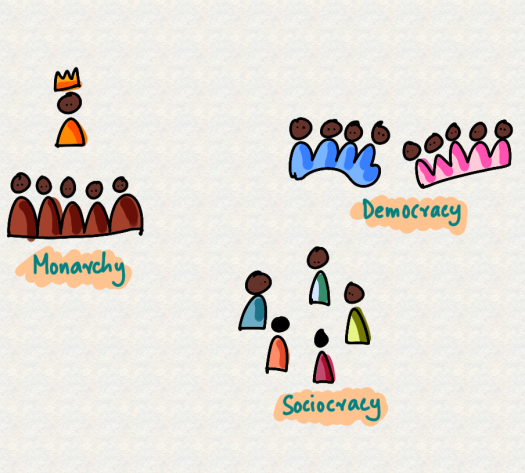 Politics is about the participation and engagement of the wider citizenry – to miss that point would doom us to irrelevance. – David Blunkett

In my last post I said I wanted to look at examples of participation – what really engages and excites people in a group. But before we get into that perhaps we should take a quick look at the nature of groups and of society – because the structure of the group will surely have some influence on the kind of things that happen.

Think about the social situations in which you find yourself. There’s work, probably. Home and family life. And then there are the various institutions that you participate in voluntarily and the society you live in by dint of where you are geographically.

Work, for many people in the private sector is really a form of monarchy, isn’t it? You have a ruler at the top and layers of enforcers – a hierarchy of one kind or another. Of course, the monarch no longer has untrammelled power but the vestiges of ownership, the feudal echoes of the people that own the land and the people that work the land are still there. Everyone between the ruler and the tiller of the land is there to make sure that the ruler’s wishes get done through the administrative machinery of the kingdom.

If you’re lucky you live in a democracy where the voices of the majority decide what is to be done. It’s not a perfect system but its better than the alternatives. But do you practice democracy anywhere else – at work or at home? Do you have a democratic system where your children have an equal say and you go with the majority? Or are you autocratic – enforcing the rules as you see fit?

And then there is this thing called a sociocracy – a body of people that have social relationships and have a way of self-organizing, deciding between themselves what to do rather than being organized – and told what to do. There’s a description of what this looks like in Buck and Endenburg (2012) and it essentially comes down to a few elements.

Let’s imagine a meeting, a session where a group comes together. This is easy to do, just recall any boardroom scene from any film. The imperious boss strides to the head of the table and asks for a report. A halting and fearful employee makes their statement – is harangued in front of everyone, possibly fired, and then the boss moves on to the next victim.

Now imagine a board meeting, a collection of equals, the Executive Leadership. The atmosphere here is openly collegial, and, under the surface, bitterly political. But these are gentlepeople and they read their papers, listen to the proposals and decide on motions with a vote. Democracy in action, greased by favours and backhanders.

Power only defers to power, those without power are irrelevant, their opinions carry little weight. After all, the vote used to be restricted to people who owned land – no one else had any right to have a say in how things were done.

It is naive to assume that any other system is “natural” to the way we are as humans. A dominance hierarchy is built into our DNA – it’s in our bones. Our animal ancestors settled their differences on the basis of who was more powerful and that continues with us today. Our most basic instinct is to seek and get and hold and consolidate our power. It takes all our humanity to act in any other way.

And to act in any other way is the defining benefit of being human. It’s unfair, of course, to characterize most human excesses as animal instinct – no animal could behave in the way humans do. Or perhaps they could – I haven’t looked into it. Is genocide a trait of any animal? Apparently humans share this trait with chimpanzees and it comes down to competition for resources, with the chimps anyway. But it’s not, it would seem, something animals in general do. But humans are also capable of overriding that part of us through choice, by the choices we make about how to live and work and be together.

It’s not going to far, I think, to say that both a monarchy and a democracy are based on violence towards others. Is that too strong a word? Is violence – the extent to which apes can wreak havoc on others in a competition for resources – not something we see all the time? And aren’t the social institutions we have – the police, the courts, the media, the politics – tools and processes for avoiding the manifestation of that violence? And when we feel that things have gone to far don’t we take action, which ends up being violent? Isn’t that clear from the fact that you have to make it clear that you are going to protest using non-violent direct action?

Now, if you look at this from a systems point of view – perhaps using Deming’s formulation – you’d say that most of the problems have to do with the system rather than the people. In a monarchy you end up with people saying what the ruler wants them to say to avoid getting into trouble. In a democracy you end up speaking only to your own people and anyone on the fence because your only job is to get enough people on your side to win. The objective for all players is to gain power. Once you have power, you can decide what to do next.

If you truly want participation – if you truly want to exercise the extent of your humanity – you have to come to terms with the extent to which you are willing to cede your power. And this is a tremendously difficult thing to do. Think about it – are there any circumstances in your life where you are not in a position where you have power or where you don’t have power? You have power over your young children and your manager has power over you. Have you ever had that feeling when your child first rebels, refuses to acknowledge your power and starts to assert their own. Isn’t almost all of being a parent a power struggle with a few cuddles and love left over? Are you ready to give your young child the power to make their own decisions? Will you ever be ready?

If you are, then maybe you can be the change the world needs. It can be done. Remember the words from the film Gandhi?

Edward R. Murrow: [at Gandhi’s funeral] The object of this massive tribute died as he had always lived – a private man without wealth, without property, without official title or office. Mahatma Gandhi was not a commander of great armies nor ruler of vast lands. He could boast no scientific achievements or artistic gift. Yet men, governments and dignitaries from all over the world have joined hands today to pay homage to this little brown man in the loincloth who led his country to freedom. Pope Pius, the Archbishop of Canterbury, President Truman, Chiang Kai-shek, The Foreign Minister of Russia, the President of France… are among the millions here and abroad who have lamented his passing. In the words of General George C. Marshall, the American Secretary of State, “Mahatma Gandhi had become the spokesman for the conscience of mankind, a man who made humility and simple truth more powerful than empires.” And Albert Einstein added, “Generations to come will scarce believe that such a one as this ever in flesh and blood walked upon this earth.”

If you want to take people with you then you have to start by being willing to give up power. What happens when you do that?

John A. Buck and Gerard Endenburg, The Creative Forces of Self‐Organization (2012).

2 Replies to “Do You Know What Kind Of Organization You Work For?”