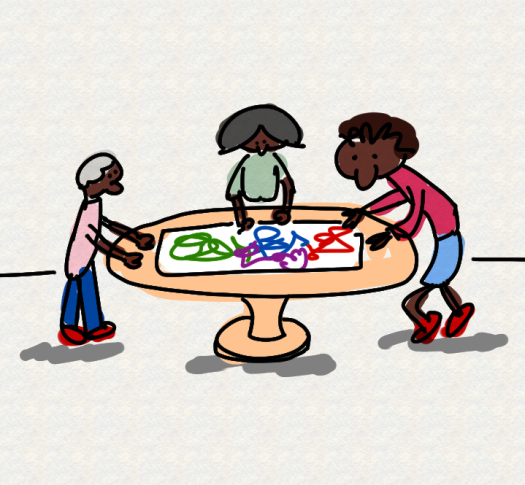 I used to teach improv courses in Amsterdam where we would do team-building exercises, and they can go south very quickly. – Ike Barinholtz

I’ve been watching TED talks while putting the kids to bed again and I’ve been searching for something in particular – about drawing and it’s potential to draw out what’s hidden inside us. The things that get overlaid with the detritus and crud of life until we forget they exist.

I started with Ursus Wehrli and his talk Tidying up art. It’s funny because he takes modern art and rearranges it to make sense. And he’s serious because he’s taken out a patent and he gets the point because he is taking art and making art.

Ursus Wehrli’s talk led to one by Ze Frank called Nerdcode comedy which is again sarcastic and funny and serious and eye-opening. Around 14 minutes into the talk he talks about creating online spaces where people who don’t think of themselves as artists can come together and share the feeling of creation – of making things. He talks of living in a “culture of guru-ship” and that has only become more the case now. Every person you see, every video, everything that’s brought to you by the algorithms is polished perfection, experts telling you their expert stuff, perfect people with perfect bodies showing you how they live perfect lives.

That’s not participative or expressive so Ze talks about creating “meaningful environments for people to express themselves”, creating silly, fun things to do like competitions for photos of “When Office Supplies Attack” or “Toilet Paper fashion”. And then, in an offhand comment that is almost certainly perfectly rehearsed he says, “But it’s peripheral activities like these that allow people to get together, doing fun things. They actually get to know each other, and it’s sort of like low-threshold peripheral activities that I think are the key to bringing up some of our bonding social capital that we’re lacking. ”

Now that’s insight and I’ll tell you why.

I have, like you, attended lots of webinars and sessions where people tell you stuff, throw stuff at you. I’ve also attended workshop sessions and team building exercises and almost certainly hated all of them. I’ve developed my own approach for running certain sessions and I think people like them because what I do is ask them to talk and I ask questions and listen and try to understand and people seem to like that. But that’s not group work, not in the least.

So, I attended a session sometime back where we got put in small groups and had to work on a task together and I loved that, because I was doing something that wasn’t hard to do – I kind of knew it – and I was working with other people and we were creating something together – and that experience of making – in a small group – made that session memorable and exciting and something I’m writing about weeks later. So what made the difference? I think it was this peripheral activity, where we did something fun and got to know each other and that created social bonds.

Now yes, those bonds are built quickly and often short lived. We’ve all been to events where we do something together, learn more about each other and then go back to work and everything goes back to the mean, reverts to what was happening before and you might as well not have bothered with all that activity stuff.

But at least we have a model – an insight into how things work that we can use. And that is this – the peripheral activities are simply a way to loosen up, to get your head in the game and start to get to know and like the people you are with. Eventually, whether you succeed or fail depends on how the team works on a real project. And I remember a session with these dynamics as well – the first session went well because we worked as a team. The next, we changed partners and it all went south mainly because of one, rather domineering person who tried to control everything.

These activities won’t fix a team with the wrong people – but if you have the right ones and you get them to work together then you’ve got a chance of creating something good. But, how do you tell a good team from one that simply says all the right things and doesn’t really work well under the surface?

Eventually, it will show up in the results. We can go back to Warren Buffett, who said that the value of a business in the long term depends on how its earnings grow. A real team will eventually show real results – as long as it’s in a good business.

We’ve digressed a bit but that’s ok. The thing is that getting people to engage is hard – and we try and do it by getting them all in a room together. Maybe one of the benefits of the pandemic is that we will try and do more of these remotely and that means we need to figure out how to make shared experiences work online. There are lots of tools and I don’t know how well they work, maybe that’s something to explore actually. Get away from the stuff that’s in your face with Twitter and LinkedIn and go find the other stuff that actually works for real people.

Ze talks about online drawing, which was hard then, and is still not that easy now, although we are getting there. And an easier project called the “Fiction Project” where you can do collaborative fiction writing. That could be interesting for group “futuring” or planning exercises.

The thing that most experiments struggle with – in the social space anyway – is keeping things going. When does an exercise turn into a habit or create real change?

Maybe I need to go in search of these – get off the beaten track a bit and find examples of online community that are just plain different.

If not, I’ll start looking for the next post.

One Reply to “How Can You Help People To Get Along?”