Focus on the journey, not the destination. Joy is found not in finishing an activity but in doing it. – Greg Anderson

Today is a bit of a reflective post, part way through a book project that I don’t feel very qualified to write. There are a lot of things that I’m wondering about, loosely put into a bucket called angst, and I think I might take this chance to talk through them.

First, why do I write in the first place? What’s the point of keeping this blog?

I’ve always written – to the point where I used to say that if something isn’t written down it doesn’t exist. I modified that statement in 2015 – because it felt like if something wasn’t online it didn’t exist. It took a few more years before I got to the point where I committed to keeping a blog – and very quickly discovered that the things that I thought I would write about were tedious and boring and I headed off in other directions that seemed interesting. Mostly just wandering, without focus or motive.

What happened then was that I discovered I could fuse drawing and writing and that was something not many other people did, at least not when it came to the kinds of spaces that I was exploring. And somewhere along the way I also figured that I needed to give myself time to get the hang of this writing thing. The best time to have started was 20 years ago but given that I was where I was I gave myself 10 years and a target of a million words to get the experience I needed – a sort of self-directed apprenticeship. I would try and write every day.

Three and a half years later I manage to write around 250 days a year – losing a hundred or so to late nights, tiredness and holidays. And I’m on something like 620,000 words. The words are accumulating, building, and along the way I’m getting less self-conscious, less worried about image and how you think about what I write and allowing myself to just write first – let the output happen regardless of whether it’s good or bad or anything.

The result is, however, that I’m not sure what I’m really writing about. I thought it was about management and that worked for a while and then earlier this year I started working on themes, book-length projects and that’s been good for giving me a structure to work from rather than random shots in the dark. So, I wonder, should I have a theme? Should I focus? Should I write here about one particular thing for a particular imagined audience? Or do I write about how we can get better at just getting along better together alongside my interest in computers and open source software and my most recent obsession with medieval writing technology? Are you interested in everything or something in particular and should I write for one of you or an imaginary many or for me and hope that it’s useful to you as well? 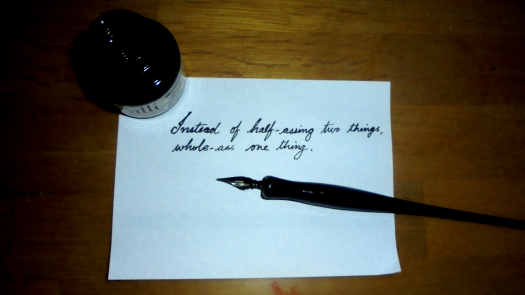 I don’t think there are clear answers to any of this. It’s hard to explain why I write to someone that isn’t familiar with my culture or hasn’t read Zen and the art of motorcycle maintenance. Because the real answer is that I write for peace of mind. And much of this is focused inward rather than outward. Now, I’ve read criticisms of Eastern writing as not being descriptive enough, not focusing on the stuff around us – like I should write about the weather and the glint of evening light on tiled roofs and the opening of petals and how the dew sits on leaves. And I don’t know but all that stuff is there and you just have to open your eyes and look and if you close your eyes it won’t matter because it will still be there and if you tell someone else about it it won’t matter because if they don’t go there and open their eyes they won’t see for themselves and get the feeling that you had when you had it. I think what’s everywhere is there but what’s inside you is complex and unknown and far more mysterious than a flower – or perhaps it’s just as mysterious but it matters more to you that you know who you are.

There’s just a lot to write about and think about and document. Some of it is just writing, getting stuff out of your mind and onto paper and some of it is useful. And all of this is real life because nothing is nice and neat and clean in a model and if you learn the model all you learn is this abstraction, this thing that tries to say here is how it works and it never really works because the model tries to grab too much and ends up holding to nothing.

It’s like the joke about the cartographers who wanted to do a really detailed map of the Earth and the farmers complained because if it had all the detail it would cover the land and stop the sun getting through. Ironically we now have something that’s close to that detail with digital maps because we can zoom in and out and have that detail at different levels. So maybe I’m wrong, when it comes to maps you can now capture everything, that you can photograph and map anyway – and perhaps we can do something similar with the mind. Maybe that’s what’s going to emerge from the social minds that we are now creating. Each blog post, each tweet is, could be, an insight into a real human being or it could be reproducing or duplicating or recording the same old ideas but I don’t think so – social media is like a market for attention and, like any other market, in the short run it’s a voting machine and in the long run it’s a weighing machine and the stuff that lasts will very likely be the stuff that most people find useful. Or, to be more precise, that people find useful. Even if one other person finds what you do useful then you are creating something of value.

I suppose when it comes down to it what I’m really interested in is thinking – and how that whole part of our life works because it’s the thing that makes us uniquely human and also battles the part of us that has evolved to be what it is over time. When I think about the hundreds of thousands of words I’ve written, many of them are trying to approach the challenges of thinking better and exploring how using thinking tools might help – whether on paper, digital tech or programmatically. 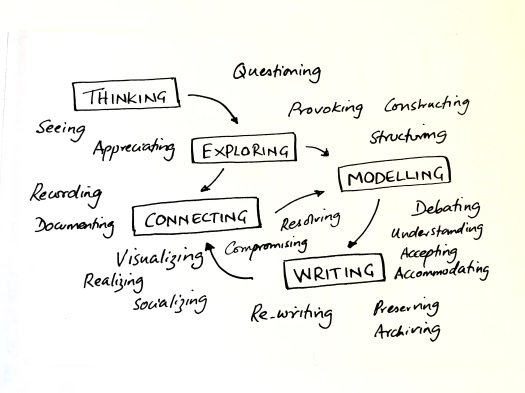 When you look at what’s involved here there are so many words that describe what’s going on – and words are crucial – they are often the end result that matter. We compress meaning and understanding into agreements expressed in words. Everything else makes you feel – you look at an image and you feel something, you watch a video and it makes you feel something – a movie is no good if it doesn’t tell you a story that makes you feel something. But words, words are the things that mean you do something. Of course, feelings make you do things as well, but it’s the complexity in the choice of words that means you do the right things if the words are well chosen and based on a good understanding of the situation and what needs to happen to improve it.

I’m watching videos from artists and thinking that the way I draw hasn’t improved in six years. And then I tell myself that’s ok because I’m not trying to draw. My purpose is not to draw pictures but to write a million words to learn how to write – and so what matters to me is the words I get out and getting better at having those words say what I want to say. Wrestling with words is no different from wrestling with a paintbrush or with a lathe that makes the body of the dip pen that I use to make more words because I want to get a sense of what it’s like to carve them into paper in addition to tapping them into a computer.

This post is really a break, something of a rant because I needed to get clear once again what it is I do.

And I will get back to doing that in the next post.