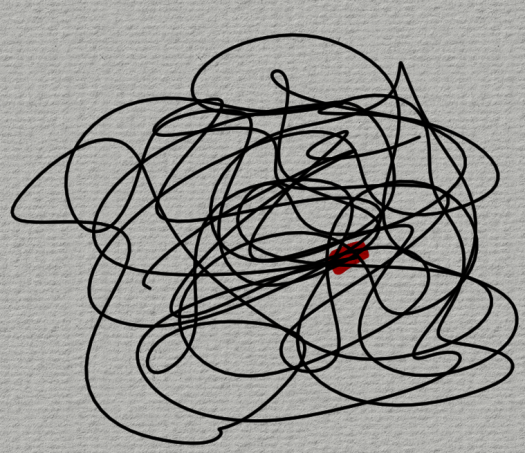 I never knew anybody . . . who found life simple. I think a life or a time looks simple when you leave out the details. – Ursula K. Le Guin, The Birthday of the World and Other Stories

There must be something built into us that looks for the easy route, the answer, the magic bullet.

I took the opportunity provided by a teaching moment to remind one of the small people in the house how to do long division.

At the prospect of having to do work there was much wailing and gnashing of teeth – surely it was just possible to arrive at the answer.

At least long division has answers.

Much of life is more complicated.

Life is complicated and mysterious

Is life simple or not?

I used to think it was simple – and then I started to read.

At the moment I’m browsing through old ethnographic studies written in the early 1900s that describe the places and communities I come from in India.

If you put aside the casual racism and focus on the observations you start to realize certain things.

For example, there was no technological innovation happening in rural parts of India.

The land was incredibly productive, the accounts wrote, but the people incredibly unproductive.

It took ten people to do the work in an Indian village that one person could do in England.

No one tried to change things because the attitude to life was fatalistic and there was a culture of abstinence – things happen because they happen and in any case we don’t need any more than we have.

These attitudes were barriers to progress, the ethnographies concluded.

At the same time they noted that there was no poor law despite the poverty.

In other words, you didn’t have a need for the state to look after destitute and hungry people.

The world they were describing meant that everyone had work – inefficient work but they were still able to sell their labor and the social system meant everyone was fed because of the mutual obligations in place between workers and employers and the way family ties and support worked.

In the 20th century, progress has brought us the things we see now – and life is different.

You could argue that it’s the opposite situation around the world – people feel more in control of their lives and options because they are better educated and abstinence has been replaced by consumer societies, where there is an abundance of everything at reasonable prices.

But in the richest of societies you have very poor people, including those who could not possibly live without state support.

In a world of abundance there is desperate poverty and decreasing opportunity to sell your labor.

Now, just making sense of those different times and people and places is going to be an exhausting endeavor.

The ethnographic studies are slices of a time and place – vital records of a past that has perhaps already disappeared.

After all, we know that people consume too much.

Is abstinence the answer?

Or do we need to make the same number of things and more but somehow reduce their impact on the planet?

Perhaps the first thing we should accept is that our understanding is going to be limited in some way.

A small theory of something

When you’re trying to make sense of this mass of complexity facing you, then you probably have to start with a small bit.

To understand a people start by understanding a person.

To understand a person start by understanding how they think.

To understand how they think start by asking questions about a particular subject.

When you’re done you’ll get a thin slice of knowledge – an understanding of their world from their point of view.

And people do this all the time – come up with a grand theory of everything – wrap these observations into general theory.

Then you run into conflict, into argument about method and how valid your generalizations are and what the evidence is for them.

All this can make thinking really quite difficult and it’s tempting to resort to gut feeling or shortcuts – rules of thumb.

Superstitions of one sort or another.

Or we can recognize the limitations of our thinking and try and adjust the way we approach the world to deal with the reality in front of us.

One person, one time at a time

I don’t think I am being particularly clear with my ideas in this post so far, but the purpose of having a blog is not just to put out clear and thought through ideas.

It’s also to work through the ideas in the first place – to collect them and see if there is something there or not.

And perhaps what it comes down to is something like this.

You have to learn to tell the difference between something that is emergent and the things that, when they act together, result in something emerging.

Take a company, for example.

You know there is a company out there – it has a name – let’s call it Elementary Industrials Inc.

But you don’t talk to a company, you talk to a person or people in that company.

It’s easy to think about Elementary Industrials behaving in a certain way – perhaps they treat their workforce badly.

But in reality, the bad treatment of workers is an emergent property – it happens because individuals within the organization work together in certain ways, influenced by the culture and behavior that has developed over time.

Individuals will have different contributions to make – people that are constrained by their situation have less of a chance to influence things than others who are less constrained.

In a very hierarchical society power is tightly controlled.

But even if people have more freedom they may put controls on themselves – worried about what others will think and how they will be judged.

If you really want to understand something, really see what that slice of life looks like from that one perspective you have to start by being willing to put aside the idea that things are simple – get ready to engage with the detail and complexity of real life.

And be willing to suspend judgment.

Start by seeing one person for what the are and listening to exactly what they have to say.

What I’m getting at here is that life is complicated enough in its own right without you getting your ideas and thoughts and judgments in the way.

To see what is really there you first need to get better at dropping your own interpretations and ideas about what is going on.

First you need to see and hear and taste and smell what is actually out there.

Let’s look at that in some more detail in the next post.