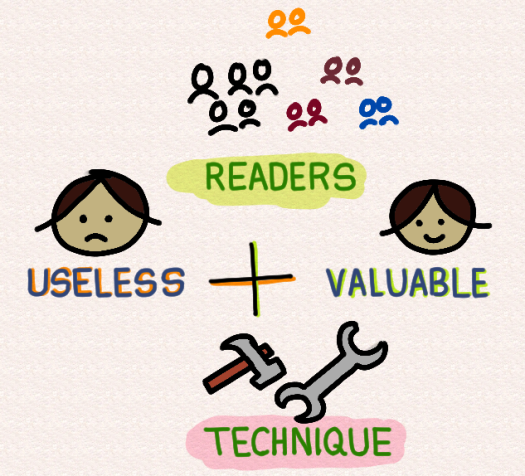 It is my practice to try to understand how valuable something is by trying to imagine myself without it. – Herb Kelleher

I was reminded recently on Twitter about the concept of semantic line feeds, something that I wrote about here some time back.

It’s an almost unknown concept – certainly to people who write using Microsoft Word or any other WYSIWYG tool.

Which got me thinking about tools and their impact on what we do.

Let’s say you’ve spent your life so far working in a certain way using certain tools – it’s hard to imagine any other way of doing things.

To someone used to a Windows PC or a Mac – the idea that you could be far more productive using a terminal and command line just sounds weird.

How is that possible – are you talking about that DOS kind of thing?

That “surely” is a trap, as the philosopher Daniel Dennett points out – it tells you someone is trying to slide something past you that they don’t know for certain.

So, I can tell you with certainty that you will be orders of magnitude more productive if you learn to use a command line.

The point is that I thought I would write about technique – because of how the global lockdown is affecting the way I write.

I’m using paper more, mainly because if I use a screen the small people in the house complain and want their own screen time.

But if you sit down and write using a pencil and paper they go away and hide in case you ask them to do the same.

And I’ve re-realised that doing a first draft on paper and then typing it up seems to result in better prose – the editing process works.

But you knew that.

And so did Google, it appears, because it brought up a video on my YouTube feed of Larry McEnerney from the University of Chicago talking about how to write more effectively.

That’s several hours that I now need to set aside – but from what I’ve seen so far there are a few gems that we would do well to internalise.

Let’s say you’re writing some sales copy – what is it that matters?

Is it that it’s clear? Organised? Persuasive?

“No,” says Larry. It needs to be valuable.

And he has a formula to memorise.

The opposite of valuable is useless. So remember:

If something is useless, it acts like a zero in a multiplication.

However good your technique, whether you write on paper or on a computer, on the command line or using Word, with semantic line feeds or plain old paragraphing – if what you’re writing is useless no amount of technique will make it anything else.

What makes something valuable, McEnerney explains, is not what we think.

We might think that value exists in the world out there.

Value exists in the minds of readers.

And this should make you stop and ask, “Which readers?”

Not all readers are going to think what you do is valuable – but you’re writing for the ones who will.

So you should always start by getting a clear idea of your audience – who are you writing for?

Then, if you write poorly, your readers will first slow down and re-read your piece, then start to misunderstand your points and then get frustrated and then stop.

They’ll do all four only if they have to, of course.

If they don’t like what you’re writing and don’t need to read it they’ll jump straight to stopping.

Now, it’s not possible to summarise a whole course in a short post – and I have a lot left to learn.

But here’s the point to take away.

From now on, when you write a piece of copy, come up with a new business idea, hit on a better way to do something – imagine a person you’re trying to sell this idea to.

This person is not interested in why you think what you think.

What they want to know is: “Why should I think the way you want me to?”

And your response should make them think to themselves: “Because it’s valuable to me!”