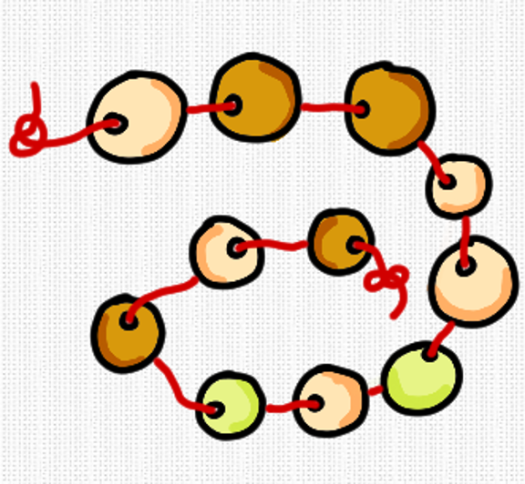 Exclusively of the abstract sciences, the largest and worthiest portion of our knowledge consists of aphorisms: and the greatest and best of men is but an aphorism. – Samuel Taylor Coleridge

I’ve been trying to explore a particular topic and started on a beginner’s textbook on the subject.

And, as I read and took notes, my eyelids started to feel heavy.

Because it was so… boring.

Which reminded me of Robert Pirsig’s Zen and the art of motorcycle maintenance once again.

Specifically the bit where he talks about what a section from a beginner’s textbook on a subject often looks like.

“That is the romantic face of the classic mode.”

It’s the thing you see – ideas chopped up into parts and served on skewers, imprisoned in their little sections and herded together with bullet points.

I’ve also been thinking about ways of taking notes.

In the Western world you have the idea of a commonplace book, a collection built up by individuals who copied out passages from books they read and wanted to keep.

Then you have a research tool called the Zettelkasten, used by Niklas Luhmann to organise what he learned.

Luhmann put down snippets of ideas on index cards and then organised them with a coding system that kept related information together and cross referenced – helping him write around 60 books.

Ryan Holiday and Robert Greene use approaches that have the same principles at their core – an idea or concept on an index card and all the index cards put in order over time to create the structure of a book.

Now, this idea of a small bit of information on small bits of paper dredged up an old memory.

Manuscripts made from palm leaves have been a feature of the Indian subcontinent for a long time.

But before there was writing knowledge was passed on from teacher to student in the form of sutras – short verses that had to be memorised and recited.

This was codified knowledge, a concept compressed into a verse that could be remembered exactly.

And, like poetry, the rhythm and sound of these verses probably helped the students memorise them.

A collection of sutras has the idea, at its root, of a thread – and I like to imagine these as a string of pearls.

There are lots of ideas, some good ones, some great ones, some rubbish ones.

Some ideas are related – and you could pick the best ones and pile them up.

And then you could string them together – and you would have something worth remembering.

I think that is what a good book should do for the reader – show you a string of pearls – a ribbon of ideas that are worth learning and remembering.

And that’s because it’s not the ideas on their own – set out individually that is going to help you.

It’s the story you put together from what you learn, the way in which you practise it for yourself in your own life.

That’s what matters to you.

Now, I suppose it’s asking too much of a textbook to give you that kind of experience.

And, of course, the sutra writers of old got it wrong after a while.

Instead of trying to tell you the great ideas, they focused on getting them shorter and packing more and more in until they ended up as cryptic codes that needed to be explained by someone with more knowledge.

But the idea of a book made from sutras, from aphorisms, is still an appealing one.

It requires a lot more work on the part of the writer to make this happen.

It’s probably easier to get a structure and throw in enough words and then move on to the next project.

But then you get bored readers and how is that a good thing?

Readers read to learn, to understand – and why do they do that?

There is a sutra for that.

“Yogas Chitta Vritti Nirodha” – Yoga is for removing the fluctuations of the mind.

It’s something that’s at the heart of Pirsig’s book too.

We learn for the peace of mind it gives us.

2 Replies to “How Do You Learn What Is Worth Knowing?”