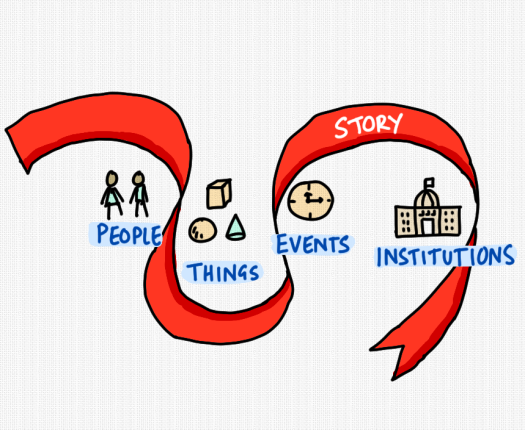 People like to think that stories are shaped by people. In fact, it’s the other way around. Stories exist independently of their players. If you know that, the knowledge is power. – Terry Pratchett, Witches Abroad

You have probably all noticed the scramble for attention online – the rapid repositioning of resources as companies deal with their inability to be in the same space at the same time as others.

Organisations that specialised in face to face services now have to change their models overnight to distance communications and no-contact delivery.

And they’re doing it amazingly well.

Close to us is a sustainable food business that used to be based on group catering that has transitioned to offering delivered meals – a full week’s menu.

Organisations that did conferences have moved to webinars.

Meet ups that required you to go down to a space now have a call in.

So, we’re rapidly reconfiguring the way in which we network with others.

On the one hand this has the effect of a tidal wave swamping our existing communications.

On top of the regular stuff we get there is a lot of additional material as the newly digital promoters tell us what they’re offering.

And maybe things will subside – after all most of these organisations have customers and lists they have built over decades and they are talking to the people who already care about what they offer.

It’s just that the story they’re telling about what’s going on has changed.

Terry Pratchett’s book Witches abroad has the penetrating vision of his other books – as an impossible land filled with impossible characters that play out their impossible lives – while revealing fundamental truths about how we live ours.

We don’t often question these – wonder how they came into existence.

Most of them seem like they’ve always been there – and they have been – for our lifetimes anyway.

Things like democracy, a parliament, libraries and the NHS.

But what created them in the first place?

What’s there, binding everything together, like an invisible ribbon coiling around the world we think we live in, is a story – many stories.

The stories that have created the way we think now.

What happens in a crisis is that some stories start to fray and rip and others take their place.

We replace stories about how important it is for managers to see what their workers are doing with stories about better remote working and mental health.

We dig out forgotten stories about community and helping others which we didn’t need when we all had cars and supermarkets and could get everything we needed without speaking to a single person.

When you think about it this is something we’ve always known.

Stories are like a programming language for our brains.

We use them to program our children – with language, with ideas, with thoughts, with ways of being, with kindness.

And when we’re older we still crave those stories – although we think that we’re too old for them now.

For a few decades now I’ve read mostly non-fiction – and over the last couple of years I’ve started to realise just how thin and translucent and fragile most non-fiction is.

Fiction, on the other hand, is deceptive – while it seems like a child’s pastime, like something you read on holiday at the beach – it captures the human experience far more completely than any dry analysis of the situation.

With Pratchett, who I rediscovered recently, I started with the book on the left and started moving right.

And then they closed the libraries…

The point I think I’m trying to make is that life is complex and wonderful and deep – but while we’re experiencing it it’s too hard to understand what’s going on.

A fish, for example, probably doesn’t have a word for water – even though it spends its life in the stuff.

A story, on the other hand, picks out a few essential lines from that complex life picture and shows us more with those few lines than we could ever see by living the whole.

And that’s how it shapes how we think.

And that’s why stories have power.