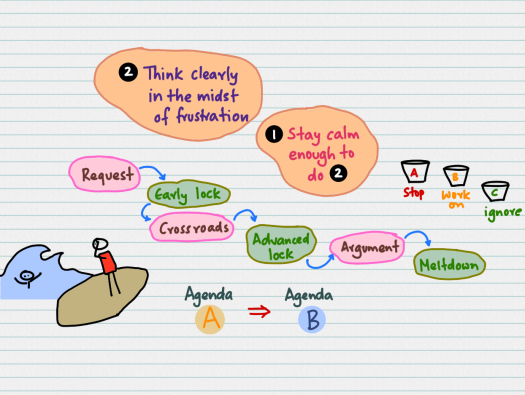 When I started this blog I described how it built on things that I learned trying to communicate with children.

As the kids grow older, the lessons become harder to learn – because how we, as adults, need to act may conflict with how we naturally act.

For example, we have thoughts about rules and discipline that we take for granted – we have views on whether children that act badly are doing it for attention or to manipulate us.

And we don’t question these beliefs.

But we should because it’s something that repeats not just with children but with coworkers, with politicians and society at large – after all, when do we stop acting like children inside?

Ross W. Greene’s book The explosive child sets out some ideas that are worth considering – and perhaps they will help in one situation or another.

One of the things Greene talks about is the need to understand how a request to a child progresses to a “meltdown”.

You ask him to stop and come and eat breakfast.

The child is enjoying the show and enters an “early lock”, saying he want to finish.

Now you as the parent are at a crossroads.

Do you insist that he stop or do you leave it?

You both go head to head with an argument – perhaps you shout and demand that he listen.

And then you have a meltdown.

This is something that many parents have experienced with their children.

And you don’t need to look far, especially among the current crop of global politicians, to see the same behaviour.

And this change can be jarring, like changing gear from sixth to first – causing your engine to, as Douglas Adams out it, “leap out of your hood in a rather ugly mess”.

So, you need to figure out how you can get someone to shift agendas – and that requires working the gears in between the two extremes.

But how do you do that?

Well, there are two rules to remember.

The second, Greene says is to think clearly in the middle of whatever is making you frustrated.

The first rule, however, is to stay calm enough to do rule number 1.

These rules are not limited to parents.

How many managers have you seen fly off the handle at their staff – and how is that a useful way to act with other people?

Now, how can you deal with these situations?

The earlier in the process you intervene the more likely it is that you’ll have a good result.

And that means working on the request, early lock and crossroads stages – to adapt and change your behaviour to empathise, distract and engage your child before the locks set in, engage and he loses control.

But clearly you can’t be perfect and understanding all the time.

That’s why you need three baskets.

A is for stuff that’s unsafe – you’ve got to do something about these behaviours, or at least change the environment to minimise the chances of them happening.

B are the things you choose to work on – the areas where you can actually work with your child to improve how they make choices.

And C – leave those alone – they don’t matter and you can come back to them when they are important.

Greene starts his book by quoting Brownowski who said you “master nature not by force but by understanding.”

The key to working with your child is developing understanding.

And that’s the key to working with everyone else as well.