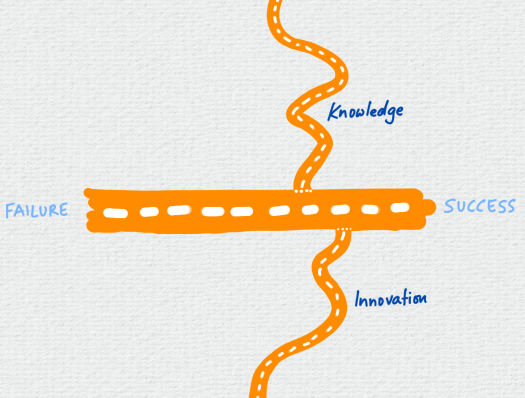 If you’re not failing every now and again, it’s a sign you’re not doing anything very innovative. – Woody Allen

Most businesses set up in the last century don’t exist any more.

The vast majority of species have died out.

And ideas once thought eternally true are being invalidated all the time.

Failure, then, is a natural thing to happen – everything dies – it’s the surviving that’s unusual.

These are the kinds of things Paul Ormerod explores in his book Why most things fail: Evolution, extinction and economics, taking an economist’s view of how businesses and governments operate or, more commonly, fail to operate.

There are some quite interesting ideas in the book – not least among them the fact that while it’s easy to say things about business it’s very hard to do them.

For example, it’s easy to say that you should make more money than you spend to stay in business – but how much?

Do you make a penny more, or ten times what you spend?

Should you locate yourself near a competitor or far away?

Do you specialise and do just one thing really well or do you become a generalist, able to do many things but not as well?

What comes across, after all that analysis is just how poor maths is when it comes to explaining the world around us.

The models that are used to explore ideas are very simple and the one thing they tell us is that simple rules lead to complex behaviour you can’t predict from knowing just the initial rules.

In other words, the number of possible futures facing us is so vast that it’s impossible to predict which one will happen.

So, what should you do if you want to survive into one of those futures?

You need to do two surprisingly simple things in order not to fail – maybe even just either one of them.

The first thing is to get knowledge.

In the simple models agents with knowledge survive longer.

Start a business you already understand and you increase your chances of success.

Start something you don’t know at all and you’re on the fast track to failure.

The second thing is to innovate – to try things out and create something new.

That’s where the successes that you’ve heard about come from – the facebooks and googles all come from people doing something new – from innovating.

In evolutionary terms that’s the equivalent of trying out really long fangs or extra spiky claws.

Learn your business and try out new things on your customers.

Is it easy to do?