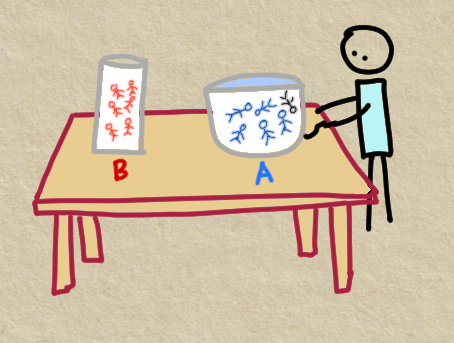 Never write an advertisement which you wouldn’t want your family to read. You wouldn’t tell lies to your own wife. Don’t tell them to mine. – David Ogilvy

What do you do when thinking of marketing a new business or idea?

If you follow the traditional approach you start with a plan – and writing that plan requires researching and understanding your market.

One way to approach the task of research is to look at it as a scientific problem.

You have a population out there and you can segment that population using various characteristics – geography, income, job titles and so on.

Once you study your population – little humans suspended in a vat of solution you can come up with your campaign – say a social media or search engine ad and let it run and a percentage of the humans will make their way towards you like iron filings towards a magnet.

This system works – after all many people have successfully used it to market their businesses online and offline.

So, surely you can use it as well?

Well… there are a couple of issues that are worth understanding first.

I was listening to Jim Collins being interviewed on the Tim Ferriss show.

It’s a fascinating episode and you get a chance to listen to a management legend – someone who has built a career on studying companies using methods like the ones described above – positivist ones.

Collins and his team study huge amounts of data, coding them and pulling out insights – which is how he identified a set of companies that outperformed others in his book Good to Great.

But, the problem is that despite all that data the characteristics that made the sample companies great only describe what they are – and are little use when thinking about companies not in the sample.

That’s something a paper by Lee and Baskerville titled “Generalizing Generalizability in Information Systems Research” goes into in some detail.

To cut a long story short you can study a thing and say things about what you see and the measurements you make.

But what you can’t do is prove that what you learn or believe is going to apply to other things.

You can assume, guess and try it out – but you can’t generalise – say it’s generally true that if you do what you did in A you get the same result for B.

Which is what Collins says as well: “The books never promised that these companies would always be great, just that they were once great.”

So, what’s the second way of doing your research.

Well, you need to do what the experimenter is doing in vat A – jumping in and getting involved in the situation.

If you’re trying to engage with people – trying to get them to listen to your pitch about what you do then your starting point is to understand them by living the way they do.

Sort of like ethnographers of old used to do – go and live in societies to understand their customs and rituals.

And that’s what you need to do – go to the people you want to talk to and understand how they live and ideally, live it yourself.

That kind of research doesn’t try and generalise – it tries to understand.

It doesn’t use stats and conversion ratios but looks at people and appreciates them for what they are.

And I don’t think you can play games like saying you’ve created personas so now you understand the market and what you need to do.

Now, of course, bosses want results and want them quick.

So just buy that list and send out some emails.

But if you really want results you’d be better off learning how to do good quality research.

Research that seeks to understand – not from a distance but by getting up close and personal.

It’s a bit like a celebrity who spends a night out in the open to get an appreciation of what a homeless person goes through.

That’s better quality research, from this point of view, than a pile of papers written in a warm, cosy study about the nature of the homeless experience.

If you want a name for this kind of approach we can borrow the term Genchi Genbutsu from the Toyota Production System.

Which means Go and See what is happening for yourself.