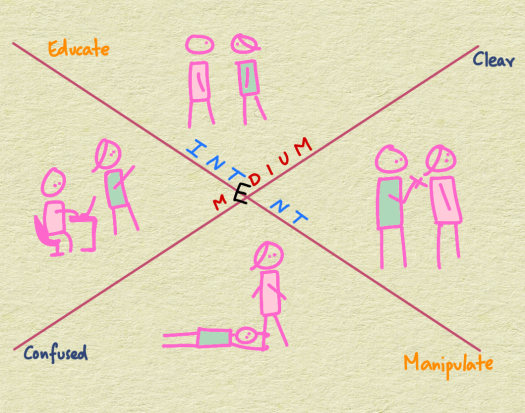 Evil begins when you begin to treat people as things. – Terry Pratchett, I Shall Wear Midnight

We have been so thoroughly indoctrinated into the world of scientific thinking that it’s hard to imagine any other way to approach the world around us.

Marketing communications, for example, is about how you talk to prospects and customers.

The textbook on my shelf says that it is a “… planned, integrated and controlled interactive dialogue with key target audiences…”

In other words, the writers believe there is an audience out there and you can plan and control how you talk with it.

Except, there isn’t an audience. There are people – individuals – who make decisions about how to interact with what you put into the world.

You have no control over what they do.

There is an industry built on the idea that you can get people to do what you want by being very clever about the way you create your marketing material.

But clever in the sense of doing what – what’s the intent?

I suppose you can look at intent along a line with two extremes.

At one end you’re looking to educate your prospect.

At the other you’re trying to manipulate them.

One purpose of your letter could to explain the features and benefits of your product to a reader so they can make an informed choice.

Or you might have a load of unsold stock that you need to unload and the purpose of the letter is to get some mugs to send in their money and take your tat.

I suppose if you find yourself in the second position it’s worth taking some time to reflect and ask if that’s really what you want to be doing with your life.

If you’re good at what you do – writing marketing copy, for example – do you feel good when it is used in that way?

The medium you use invariably affects the message you create.

You’re going to create a very different message if you’re sending a letter than if you’re creating a TV advert.

And the thing about the medium is how you use it.

Novice marketers spend more time on look and feel, assuming that such things have an impact.

On most mail clients, however, images are suppressed and all you get is the text that remains – which is often too poor to stand on its own and usually ends up in the junk folder.

So you could look at the medium as another continuum and ask whether your use of it is confused or clear.

A confused approach relies on throwing lots of stuff out there and hoping the magic of conversion ratios works.

It’s about as annoying an approach for the recipient as having the sender attached to your legs and having to drag them around all day.

A confused approach that seeks to educate probably ends up turning people off.

A clear approach that seeks to manipulate might work – but not in the long term because people hate being duped and will not give you a second chance.

Because, if they had, they would realise something that writers have known for a while.

You don’t write for an audience.

You write to one person – and sometimes that person is yourself.

If you do a good job that person will understand what you have to say.

Warren Buffett, for example, starts drafting his shareholder letters with the words ‘Dear Doris and Bertie’ – writing to his sisters to tell them how he has been managing their investment for the last year.

He doesn’t try and address thousands of shareholders – by focusing on a couple his message is focused and amplified rather than diffused and incoherent.

Marketing, when it comes down to it, is a conversation between you and another person.

Your intent is to educate.

And whatever medium you use, you need to try and keep it clear and simple.

The rest, as they say, will take care of itself.