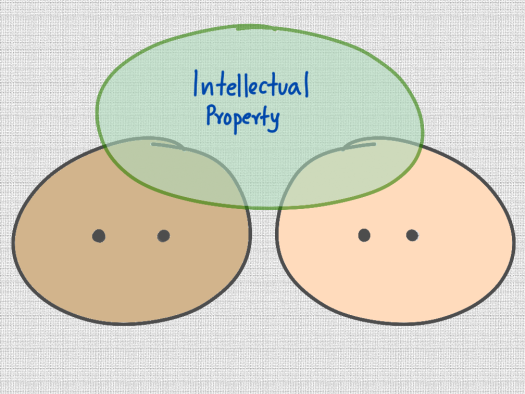 Intellectual property has the shelf life of a banana. – Bill Gates

I’ve been spending more time programming recently – back to the practice of putting code together that does something interesting.

And when you do that you realise just how indispensable the Internet is these days.

Almost every question you ask has been answered by someone who has been there before.

What’s more interesting is that there is little difference between free stuff and the stuff that should be locked away until you pay for it.

Entire textbooks are online – illegally obviously but that doesn’t make them any less there.

Let’s say you’ve gone to the trouble of writing a book – creating all that intellectual property – this is probably not something you want to happen.

One would suppose that the traditional approach is to get very cross about the whole thing and try to stop people pirating your stuff.

After all there are plenty of reports saying that writers don’t make any money and if you want to make a living writing this is not a good thing for you.

At the same time, there’s something else going on.

There’s a lot you can say about the economics of the information business but there’s one thing that stands out.

I can tell you I know a lot about something but there’s no way you can know for sure if I know until I tell you what I know – at which point you know what I know as well so why would you pay me for what I know?

That’s a long sentence but the point is this: knowledge is not like a banana – you can’t look at it and squeeze it and smell it to tell if it’s fresh or rotten.

So this makes it hard to treat intellectual property as the same as something tangible like real estate or gold or oil.

But here’s the thing.

When you’re looking for information you normally go on Amazon and look for reviews – that’s an indicator of whether the thing is good or bad.

But reviews can be bought and lists can be gamed – as every best-selling author on Amazon knows.

And the disappointing thing about many books that are on the lists is what’s in them – they’ve got good ratings but not good content.

There’s a growing movement, however, of people writing books, especially textbooks, and putting them on their sites for free.

That gets rid of the pirates – after all, why would you pirate something that’s already free?

But even with the pirated books the single biggest benefit a reader has is that they can look at the book and judge exactly how good it is – by reading every page.

And then, if you’re like me and you find a good book you want to have it.

Reading the book doesn’t weaken one’s resolve to have access to it and buy it if possible.

And only then head around to the full price version if it’s one of those books that no one wants to part with.

This is still not good news for the authors out there.

They’re not making money from the free copy online or the second hand ones littering the market.

But what they have done is increase their exposure to the market – to people who like what they do enough to support them.

And that’s the thing with intellectual property now.

It’s not enough to claim that the ideas in your head have intrinsic value that deserve payment.

The fact is that by giving it away for free you lose absolutely nothing.

But you gain the interest of people who may start to care about what you do enough to support you not because they have to but because they want to.

And that, perhaps, is the future for the knowledge workers out there.