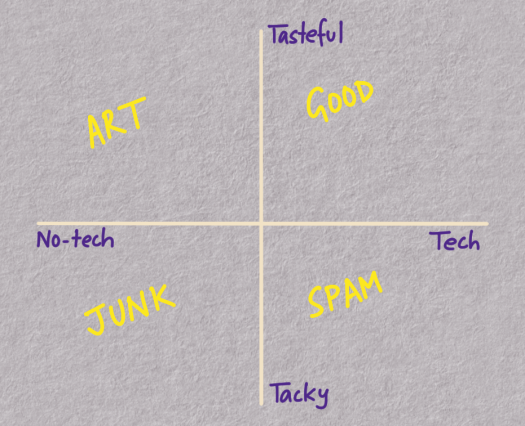 There is nothing either good or bad but thinking makes it so. – William Shakespeare

I’m on a bit of a hunt for blogs that justify my point of view.

Or, better still, blogs that have a point of view I can adopt.

Because the fact is most of us don’t really know what the right thing is to do.

We look to others – searching for clues to the ways in which they approach the world – to see if there are any lessons for us.

And this is an increasingly less diverse process as we are pulled inexorably to the few opinions that surface on Google.

For example, if you’re interested in people who write about technology and marketing in a relatively understandable way you’re pulled pretty quickly in the direction of 37 Signals / Basecamp and Seth Godin.

But then again, you find stuff like the picture above which I’ve adapted from one on Seth’s blog.

Today’s search actually started from a fairly innocuous point – I was wondering about how technology was being used for good.

Unsurprisingly others have thought about that as well – so you get Apps for Good and a grant funding programme called Tech for Good.

Which is perhaps a little too literal interpretation of what I was looking for.

As techies, we get interested in the nuts and bolts of a thing.

Whether it’s useful or not is a side effect of curiosity.

But most people aren’t techies – but they like tasteful things.

For them, what’s important is the Art, with a capital A.

Of course, there is technology in the background, behind the font engines and steam pressed wood, but no one sees it because they are too busy looking at the surface.

But if it isn’t Art – then it’s tacky and that’s junk.

It’s the difference between Lego and something that’s not Lego. It just doesn’t fit.

And of course, a lot of people make a profit by making tech tacky as well.

Think spam and cyber-crime and a bunch of other things the Internet has made it easier to find.

The question we need to ask ourselves, if we sell ourselves on being a business that uses tech, is which side of the tasteful / tacky line we’re on.

You’ve got to think about whether your business model is based on long-term value or short term opportunism.

Because that’s going to drive the way you pitch and present yourself.

You’ll experience this if you have a conversation with a really pushy salesperson who has been taught that the way to win is to keep you on the phone and sell you again and again on what they want regardless of what you say.

If it’s something you really want or need you don’t need the sales call.

You want to buy – and you’ll do it the easiest way you can.

If you don’t then you’re in for a draining conversation.

As someone said, in any sales call, someone ends up selling something.

Either the caller sells you that you need what they want or you sell the caller that you don’t.

In today’s world a pushy sales call is the audio equivalent of spam.

And it’s easy to fall into the trap of doing that because all the models we see of how sales is done emphasise the hard sell.

But the businesses that go the distance are the ones that can do the tasteful sell.

The ones where referrals bring in most of the business because you’ve done the hard work over the years of doing good for your customers.

Because when it comes down to it, we all know what good is.

As Robert M. Pirsig wrote in Zen and the art of motorcycle maintenance “And what is good, Phaedrus, And what is not good – Need we ask anyone to tell us these things?”