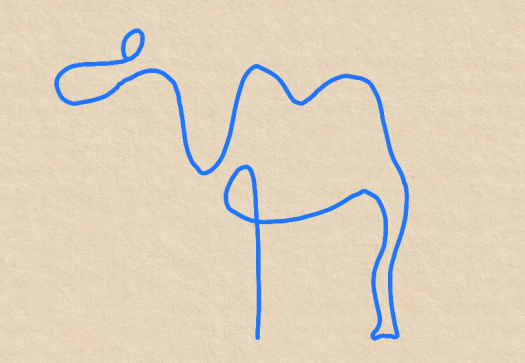 My eye fell on a copy of Brutal Simplicity Of Thought: How It Changed The World at a charity shop today and, when browsing through it, stopped at a line drawing by Picasso of a camel.

Well, actually it’s a single line, which gets across the idea of a camel well enough that I, several hours later, can reconstruct it from memory as you can see above.

And this line drawing has revealed something to me that I just hadn’t seen until now.

If you’ve been reading these posts you’ll remember that I got a little angsty sometime back about being too theoretical and not having enough hard, practical stuff in here.

Others seem to do it much better.

Tim Ferriss, for example, is all about routines and habits and precise doses of complex chemical compounds.

Tim Urban at Wait But Why has long-form posts that go into complex topics in depth.

What makes this blog different from those? what is it that I can do that adds to the world of knowledge we live in?

And to answer that I have to go back a few years to when my eldest child was born.

If you’ve had contact with children you’ll know that they’re not very rational about most things.

The whole crying and making a fuss thing works so well for them that any “adult” way of dealing with it soon fails.

So, when I wanted to get something across I would draw with the sprog – something we called Drawing A Story.

We’d sit down and draw situations and people and emotions and interactions and try and talk about them.

And when we did that interesting things happened.

For example, a three-year old, it appears, doesn’t seem to have the capacity to understand the golden rule.

If you show the kid a drawing of a big kid laughing and being mean to a small one and ask them how they would feel if they were the small one they’ll probably say sad – tearful.

The big kid on the other hand is having fun – and they can see that as well.

What’s a little harder to compute is that if they’re the big kid they shouldn’t be mean to the small one because if they were small they’d feel bad.

In other words – the whole do unto others the way you would have them do unto you doesn’t seem to be wired into their brains yet.

So, in cases like that, you have to lay down the law and make not being mean a rule rather than appealing to the child’s better nature.

Anyway… I discovered that drawing was a way to discuss quite complex things with a child and explore the limits of their understanding and, for that matter, my understanding as well.

What’s happened since then is that simple drawings – situations, people, structures, relationships – have become the way I try to learn and understand ideas and concepts.

What Picasso was doing was reducing art to a kind of essentialism – down to lines and form.

What minimalists do in life is try and reduce their possessions to the essentials – what they need to live and survive and be happy.

I think what I’m doing is working towards a kind of intellectual minimalism – to understand ideas and concepts that might help us live better in a way that I can explain to my children by drawing a story.

After all, we live in a world where things last for ever and the clutter builds up – physical clutter, intellectual clutter and media clutter.

But the world is full of great stuff, thoughts and ideas that can help us live better lives, create better businesses, communicate with others better and focus on the thing that matter.

And maybe what I’m trying to with this blog is help us see things with that child-like vision – that beginner’s mind – which is the foundation for real understanding.

And hopefully that is a useful thing to do.