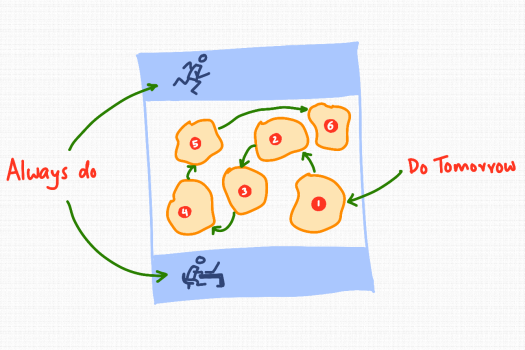 I’m reading old sales and marketing books – and one of them is by Frank Bettger called “How I multiplied my income and happiness in selling”.

His writing is to the point – every page has something that you can take away and think about.

For example, he writes about how he was struggling to make it in the life insurance business – after 10 months he was thinking of quitting when he overheard something that had a huge impact on him.

The President of his company said that the business of selling came down to one thing – just one thing. A person of ordinary ability who goes out and earnestly tells their story to four or five people every day just can’t help making good.

Bettger now knew what to do – he had to go out and talk to people.

But that wasn’t enough to keep him going. He was fired up for a while, but then started to get lazy, stop calling – and that showed in his numbers.

In the article Ivy Lee, an efficiency expert was trying to sell Charles M. Schwab, the President of Bethlehem Steel Corporation, on how he could teach him to manage better.

Schwab dismissed the idea – he already knew what to do. He didn’t need knowledge but action. What could Lee tell him that would get him and his team to do the things they already knew they ought to do?

Start by writing down the six most important tasks you have to do tomorrow.

Now, number them in order of their importance.

Now, first thing tomorrow morning, start on item one and keep working on it till you’re finished.

Then, start on item two the same way, then three.

Here’s the thing – don’t worry if you don’t get finished or do only one or two things.

You’re working on the most important things. The rest can wait.

Do this every day.

Now the rest of the story that Bettger recites – which you can read in lots of places – is that the method worked and Schwab gave Lee a big cheque and all was good with the world. Now he knew how to go ahead and be successful.

Except it isn’t the end there really.

There are three more things to think about for you and me to supercharge this system.

The first is that there are things you should always do – every day – that will matter in the long term.

Exercise, for example. Time with your family. Alone time to work on your stuff and projects.

You need to plan those into your day. For the stuff that you need to do on your own, the best time to do them is first thing in the morning and last thing at night – before everyone else is awake and after they’ve gone to sleep.

Don’t keep them in your brain. Get them on a list – stop what you’re doing if you need to so that you’ve written it down somewhere you know you’ll find it.

Getting it out of your head will let you carry on with the list of important tasks.

And you can get the itty bitty ones done when you’re on a break or need some recharging time.

If you have a job – you’re going to have to do things your manager wants you to do. If you have a project, or a side hustle, it’s going to feel like there is never time for that.

Do yourself a favour. Even if items two to six are other people’s priorities, make number one something that is important to you.

It’s like saving. The best way to save is to move the money out of your account as soon as you get paid into a savings account. Then live on what’s left after that.

One thing that might have slipped by in the story is that Bettger found out what he had to do (talk to prospects every day) first and then learned from Lee how to do it (make a list and follow it).

It’s important to know what the what is for you.

If you’re clear on what you should do and how to spend each day – you’re on track for the rest of your life.