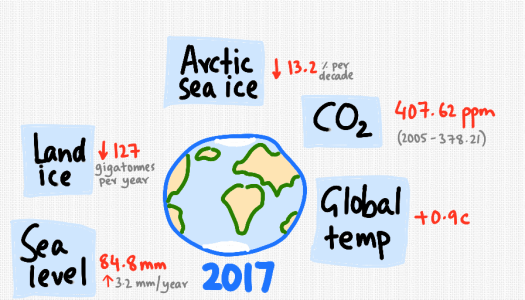 How do we know if things are really getting hotter? Is the Earth really running a temperature?

NASA can answer that. They publish annual data on global temperatures and climate trends that can give us an idea of how things have changed over time.

CO2 has gone up and down over time, but in the last 400,000 years it has stayed below 300 parts per million – but the current levels were reached in the last seventy years or so.

There is consensus, however, that a 2 degree rise is too much, a 1.5 degree rise would help us survive and much more than two would lead to climate catastrophe.

There still isn’t too much urgency it seems.

That’s perhaps because we’re focusing on the wrong thing.

The amount of sea ice is falling dramatically. The rate of change led James Lovelock to suggest in 2007 that the Arctic could be ice free in 15 years, while the IPCC thinks it could be more like 2050.

Whenever it happens the point is that all the sun’s energy pouring onto the Earth that causes the ice to melt conceals the true warming going on.

It takes a fair amount of energy to turn ice into water and all that ice also reflects heat back into space. With the ice gone, dark sea water will absorb the energy much faster.

So, sea level rises could be a better measure of the extent of warming – with some coming from melting ice but a lot from the expansion of water as it heats up.

The effects of this warming trend are unpleasant – and include droughts, hurricanes, crop failure and insect outbreaks.

It’s also not at all certain that we can stop the trend – in a complex feedback system like the Earth once a trend starts it will only stop when a new equilibrium has been reached.

Any action we take now may be too late.

Conversely, some actions that seem positive may be harmful.

Reducing haze that results from pollution and creating clearer skies may allow the sun’s rays to pass straight through and deliver more heat.

Despite this – the facts are that the planet is warming and that is going to have an impact on the way we live around the world.

We need to do what we can because, as Dee hock said it’s far too late and things are far too bad for pessimism.