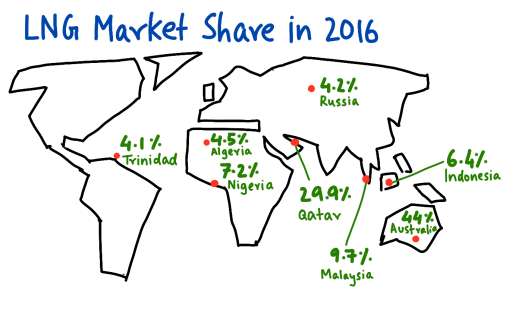 Three quarters of the world’s natural gas is used in industrial applications and for power generation.

It burns more cleanly than oil or coal, which means that emissions from natural gas are lower.

As a result, governments around the world have policies that make using natural gas more attractive than the alternatives.

So where does this gas come from?

The graphic above shows the top exporters of LNG by market share in 2016 according to the IGU World LNG Report 2017.

Qatar remains an important source of gas, although the problems it is currently experiencing with its neighbours may have an impact on gas production this year.

Russia, despite its enormous gas reserves, is a relatively small player in the LNG export market.

The one to watch is the United States.

Over the next few years, however, it is expected to ramp up exports significantly.

In the next decade, Australia and the United States are expected to be the dominant exporters of LNG to the global market.