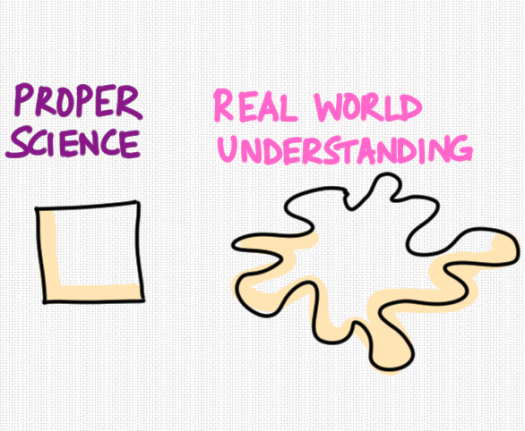 In the hidden moments between the big happenings I’ve found the time to watch The Big Bang Theory – and start again at the beginning. For someone trying to understand the nature of knowledge there’s quite a lot in there to think about.

Let’s start with scientific knowledge and the traditional idea of what that is. That view comes down to two things: there are facts, and there are theories that explain those facts. This approach to knowledge creation was a revolution in its time, a reaction to received wisdom as laid down in ancient texts and professed by priests. It said “No!” to assumptions and instead observed, noted, tested, repeated and reflected – creating reliable knowledge that has built the world we have today.

But just because it’s so successful we are now at a point where we try and fit everything into that way of thinking. It reminds me of a conversation I had twenty years ago with a young religious woman who claimed that because certain words in a text said something about the events surrounding the birth of a child they were scientific in their statements. She was wrong – but for centuries that sort of thinking held power over people – it still does now.

The thing with science is that it’s not one thing – instead it’s a state of mind that grapples with reality and, as one of the characters in the series says, “rips the mask off the face of God.” And reality is complex, complex enough to need other sophisticated instruments of science than the ones we are familiar with.

These are the instruments that I’m trying to understand and apply in my own practice. Bargheer (2021), for example, writes about the work of C. Wright Mills who in his book The sociological imagination (1959) railed against the excesses of grand theory and abstracted empiricism. In the former we get lost in theoretical fantasizing and in the latter we only consider questions that can be answered through quantitative survey research. Mills argued for a space for imagination, for creativity and craftsmanship in the construction of knowledge.

It takes careful thinking, however, to set the ground rules for this kind of work. The assertion that “it’s not scientific” can be quickly thrown at anything unusual. But then again knowledge in other cultures is not unusual – it’s different but you have to differentiate between that which is reliable and unreliable knowledge. You have to be careful not to fall into a colonial mindset that assumes that the victors and colonists are the ones that know everything and indigenous knowledge is valueless. Indigenous knowledge doesn’t have to be that held by foreigners – it can be that held by any group of people in any space – the knowledge of the reality of their existence.

The thing to understand is that real life is not box shaped. Real life is a funny sort of shape. That’s why many scientists do great work in their fields out don’t have a great impact in the world out there – they don’t realize that their boxes are things that exist in their minds. People who live in the real world, practical folk, don’t question the their funny shaped existence, they get on with living in the space they occupy. And make it work for them.