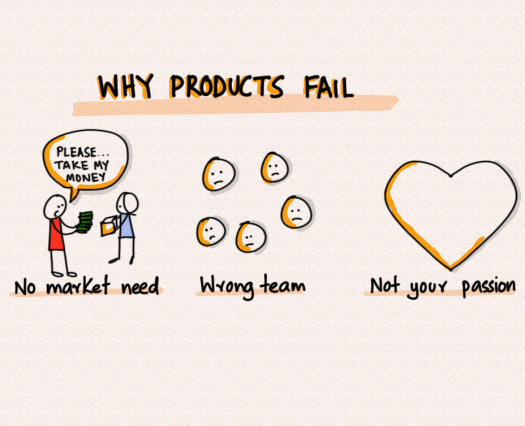 In my last blog post I was wondering how to decide what projects were worth working on – how could I tell whether an idea had a chance of succeeding or was heading for failure?

A study by CB Insights lists the top 20 reasons startups run into trouble. The problems range across business functions, from getting the product wrong, to running out of money. For me, however, three things stand out and these are the ones that I will use as a first rough and ready check as to whether an idea is worth investing time in or not.

Is there a market for your product?

An idea for a new product or business begins with a flash of insight – wouldn’t it be cool if this thing existed in the world? But just because something can exist that doesn’t mean it should or that it will be able to. The realities of the natural world, red in tooth and claw, apply to the world of business as well.

One good reason to create a product is because you want to have something that doesn’t exist right now. It something you would use and so you make it for yourself and, if there are many people like you, there is a good chance other people will want it as well.

Another good reason is to do something is if you can do it better than it’s being done right now. But unlike something you make for yourself you have to convince others that there will be benefits for them. And this is harder than you might think, for good reason. Let’s say you invent a new machine that can do things for half the cost of the current machine – does that mean the manufacturer will make a bigger profit? In many cases, the answer is no. The savings will flow through to the customer in the form of lower prices. But if you’re going to make it easier for the manufacturer to do their work then you’ll at least get a hearing and they might be skeptical at first but give you a chance to show what you’ve got.

A bad reason to do something is because you think you can change people’s minds and get them to do something differently. That’s a long, hard road and all too often, after you’ve spent all your money educating the market, someone else will come along and take the prize.

The copywriter Gary Halbert had a story about this. Let’s say you and I set up competing food stalls. You get to choose whatever you want to sell, the best quality product, the freshest produce, the most expensive ingredients. I’ll sell something cheap and quick, with no redeeming nutritional value and I’ll beat the pants off you as long as I have one thing that you don’t. A hungry crowd.

Do you have the right team in place?

This is obvious and so very important. You can do the work, of course you can (or at least you should be able to), but do you have the right team in place to work with you? If you don’t, you’re going to fail. You need to build or develop your team and give them the knowledge, tools and resources they need to do what needs to be done.

Do you really really want to do this?

The third and, for me, the most important reason to do something is because you’re passionate about it, because this is something you want to do. This is not a blind belief in yourself or your product – the kind of stubborn mentality that expects reality to change to give you what you want – but instead a real interest, curiosity, and informed judgment about the value of what you are doing. As Benjamin Graham wrote, the market can remain irrational longer than you can remain solvent. You need to know your business and know yourself and know you can do this.

Does your project tick all three?

It’s quite hard to say yes to all these questions. If you’re a single person business, perhaps the team issue doesn’t come up. But what you’re interested in as an individual may not be shared by many others out there. And doing something because you think others will be interested rather than because it’s something you would buy yourself is a recipe for disaster.

Write the book you want to read, build the product you want to buy, and work with people you like, admire and trust – and you can’t go far wrong.