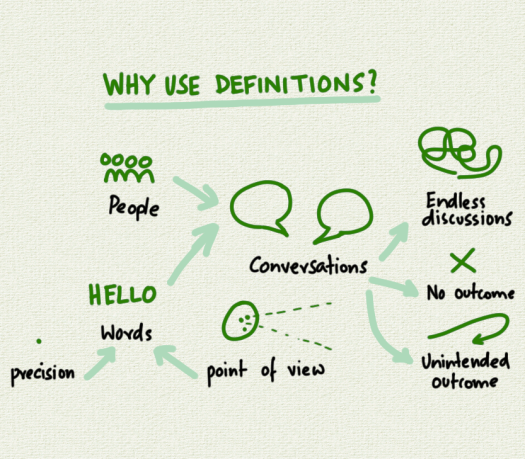 Not only is women’s work never done, the definition keeps changing. – Bill Copeland

1.the act of defining, or of making something definite, distinct, or clear: We need a better definition of her responsibilities.

I find that lectures often get to a point, early in the session, where the speaker introduces definitions. I’ve also noticed that’s the exact same point where I start to switch off and drift away. There’s something unutterably boring about definitions, something that makes the idea in there wilt and lose its vitality.

Others, it seems, have also wondered about definitions and created slightly impenetrable papers about the concept. For example, Michael B. Abbott has a paper called “on definitions” (2002) where he talks about the history of definitions. It seems that when people use words to have conversations they can often end up having endless discussions that result in no outcome or an unintended outcome. This is because we don’t use words in normal conversation with precision – a word can mean different things to different people. I remember, for example, someone getting confused about the difference between having an argument and making an argument.

Another paper by Fodor, Garrett, Walker and Parkes called “Against definitions” (1980) talks about how definitions are “one of those ideas that hardly anybody ever considers giving up.” They talk about The Standard Picture (TSP) of the notion of a definition – which helps you do the following:

The rest of the paper, which runs on for 105 pages, ends up saying, I think, that even when you use definitions you can have misunderstandings.

I wonder if definitions are most useful when we’re early in a learning journey or when we have to write answers for exams. For example, Jay Hall’s brilliant school videos start with definitions as do many other teaching videos. Or perhaps definitions are a legacy of Newtonian thinking – the idea that the world is mechanistic and therefore so is language and thought. When we think of a definition perhaps we think of it as a precise thing, like mass or acceleration or geometry – from which we can derive conclusions.

But maybe we should really be thinking of definitions in quantum terms, in the sense of a probability space or cloud. Instead of looking for a definition to give us a point we should look at it as a boundary inside which we search for shared meaning.