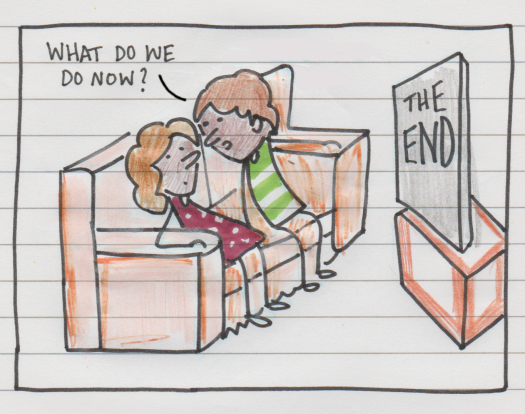 If you want a happy ending, that depends, of course, on where you stop your story. – Orson Welles

You know that feeling of despondency that comes over you when you reach the end of a series. It happens every so many weeks as you binge watch and then, the final season arrives, and you work through the episodes and then there is the final end, it’s done, the colour is drained from your life and there is a certain emptiness to the world out there.

It got me thinking about stories and how we crave them, however old we get. And the formulas work because they keep us hooked in. We watch and wait, knowing that things will work out but wondering if, just this time, they won’t. And they almost always will because the writers know that if the story goes the wrong way they have to be very careful, because if it doesn’t work out we, the audience, will get really quite unhappy.

Stories are interesting things when you contrast them to life. How do you build a story? You do it by causing conflict, putting things in the way of people, tripping them up, causing problems until, eventually, they make it through.

Life isn’t like that or, at least, it shouldn’t be like that. Life should be easy, the path of least resistance – the way of flow. In life you should study what you like, get good at something that comes naturally to you and spend your time engaged in making yourself useful to others. If you do that things will work out.

Perhaps we’re so used to story, however, that we think that drama is something that happens in real life as well. It shouldn’t though, should it? In real life we should be able to talk things through, work out our differences, express how we feel and have others give us the space to be heard.

Now, of course, when you look around the real world you don’t see that happening – because much of what we see is still filtered through the lens of story. What’s the news other than “stories”? If it’s not entertaining it’s not news, is it?

You might say stories don’t have to be entertaining. They can be a narrative, a bald one. A telling of the facts. But, of course, any narrative has a narrator and the person who tells you the story is going to be constructing a narrative. So that makes things a little complicated – because now everything you hear is a story. And sometimes you’re the narrator and the story you’re spinning is one you’re telling yourself.

It’s hard these days, but perhaps sometimes we should stop for a while, shut off all the stories and experience the world as it is. Or, we could get used to the world as it is – as a world of stories – and get better at spotting the difference between entertaining stories and telling ones.