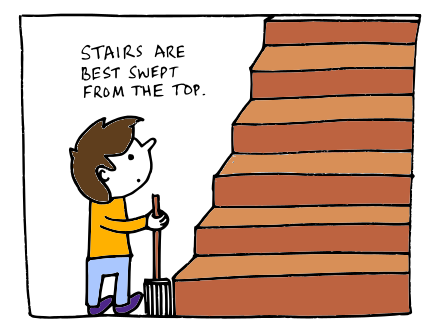 Leadership is solving problems. The day soldiers stop bringing you their problems is the day you have stopped leading them. They have either lost confidence that you can help or concluded you do not care. Either case is a failure of leadership. – Colin Powell

A short one today – inspired by a comment on LinkedIn.

I don’t know how you good you are at cleaning the house. It’s something that has to be done and quite frankly, I’d rather someone else did it. But – since we have to do it every once in a while I’ve had to get used to the idea.

I’ve always found stairs fiddly and difficult. The vacuum cleaner doesn’t sit right on the stairs and the hose isn’t quite right and it’s all a bit of an effort. Until I discovered that the place to start was at the top. If you begin at the top of the stairs and work down everything seems to go much more easily. It makes more sense with a broom, I suppose, as you sweep down and out.

Now, the original comment had to do with leadership. If you want to change things, the poster argued, you need to spend less time on the shop floor and more time with the leadership. After all, you can do all the change you want where the work is happening but unless the leadership buy in or accept the big changes, things will probably fail to improve.

And this make sense, doesn’t it? Leaders are the ones with the power to change the system. People lower down the hierarchy can do things to change how they work but they are still constrained by how the system they operate in functions.

This is one reason why things that work at an individual level very rarely also work at a group level. You can, for example, set a goal and go for it, work as hard as you can and do everything to get there. As a group, things get more complicated quickly. What’s the goal, is it the same for everyone, are we all pulling our weight and why are the rewards unequal? All these issues mean that when you go from one person to many people the way you approach things has to change.

If you want to make a difference, begin at the top.