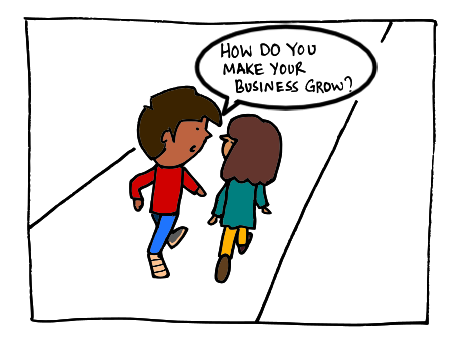 The Buddhist point of view takes the function of work to be at least threefold: to give a man a chance to utilise and develop his faculties; to enable him to overcome his egocentredness by joining with other people in a common task; and to bring forth the goods and services needed for a becoming existence. – Ernst F. Schumacher, Small Is Beautiful: A Study of Economics as if People Mattered

What we see has a huge influence on our view of the world – the news, the stories, the myths – all of them create a picture of the way the world works. But what if it’s all wrong? What if the truth is hidden from us – because there’s no profit in making it visible?

Let me explain by starting with Dr Michael Gregor’s books. He’s written How not to die and How not to diet – possibly the most densely researched packed collection of books into nutrition that you could read. His basic thesis is simple – a plant based diet is good for you. You can lose weight on low-fat and low-sugar diets but it tends to come back when you eat normal food – where normal for modern humans means ultraprocessed products.

Now, food is big business. But there’s no profit in selling you the food that’s proven to keep you healthy. The money is in the made up, the creations that blend sugar and fat and salt to send your palate into overdrive. So you don’t see adverts for ginger or apples – but you do see them for fast food and cereals. You’d think from what you see that such food will make you happy – but after that rush of taste what’s left other than regret, served with a side of fat.

There’s very little money to be made in stuff that’s worth doing sometimes. Take YouTube content, for example. I’ve seen some content that’s on DIY film gear, which is interesting and probably usable for most of us – but that doesn’t seem to attract all that much traffic. Then there are the videos that demonstrate hyper-complex setups and cutting-edge gear. These ones do well – because there’s more money to be made in the higher-end products. I think we know that reuse and recycling and repurposing is good – but we’re also seduced easily by the expensive stuff.

Now, I know it’s not as simple as that because if you can make amazing content about recycling you’ll probably get views. The point I’m heading towards is that you don’t know whether the point of something is to sell you product or if the point of something is to help you get better. And some people will argue that it’s the same thing but the money from the product has a way of skewing good intentions. Money corrupts too.

Then again, I haven’t met that many people who do things for money. Those kinds of people you can spot a mile away and they’re usually a little too eager to get you into something, a little too desperate, and I think you’re smart enough to notice and avoid them. Most people want to do something well, developing their own ability and contributing something to society. The rewards really come from what they do.

It turns out then that the formula for growth is simple.

Go out and help.