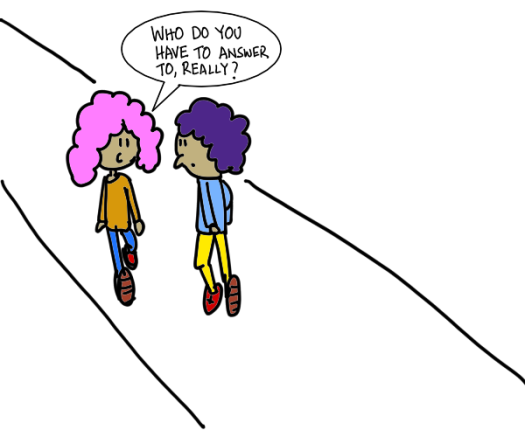 I’ve been watching “Scrubs” again, for the fourth time or so in the last ten years. It’s a cleverly written program and those of us who have experienced the challenges of starting a role and growing in it will see a little bit of the story in the lives we’ve lived as well. And that’s all of us really.

I think it’s true that we need to answer to ourselves – but what does that really mean? Is it holding ourselves to a standard or trying to always get better? Is it doing what we’re happy doing, and it’s okay if that means finishing at five and going home to spend time with your family? Or is it being the best as measured as being better than everyone else you know – and measuring yourself by how you do against the competition?

What I think brain science tells us is that it’s very hard for us to imagine doing anything else than exactly what we’ve always done. For example, think back over your own life. Are there any decisions that would have made an absolutely critical difference to the way your life turned out? I have a few of those – my choice of school, the choice of country in which to study, the choice of what to do after that. Did anyone else make those choices for you – or are you responsible for them yourself? And do you think things would have turned out differently if you had made a different choice back then?

If you’re like most people your brain has accepted its reality – you are pretty happy with where you are now. Yes things could be better in some ways but the big things are ok, aren’t they? When things are really wrong it’s probably not because of the things you did or what you were able to control. But if you were able to make a choice you mostly did ok – it’s only in the movies where people make obviously bad decisions, isn’t it?

Then again I don’t know anything about you. Maybe you do make decisions differently. I was listening to the radio the other day and this was clearly the story of the day. Someone had called in with some kind of relationship problem – they messed around a lot and then liked a person and then messed things up and then got that person back but were not worried they were going to lose them because their ex was threatening to tell all – that sort of thing, the kind of thing the presenters described as the plot of every 90s romantic comedy. And one of the presenters suggested going for the deny everything approach and the other talked about bad decision after bad decision and why on earth you would do this – and there was no real consensus on the advice other than the person calling in had made their bed and should get on and lie in it.

Life’s hard enough without making it more complicated by making decisions that are going to end up causing you more misery. Then again, thinking about it now, I can remember people who went on and did just that – making choices that might be pleasant but that had a non-zero probability of turning out quite unpleasantly indeed.

So, what am I saying here?

If you don’t know how to make good decisions then your first decision should be to learn how to make better ones. Because what matters is not where you are and how you got there but what you’re going to do next.