Acting is something different to everybody. I just know that if you watch an actor or actress getting better and better, I think that’s them just understanding themselves better and better. – Cameron Diaz

Many reasons for why we do things the way we do come down to biology – but most of us don’t know enough about biology to figure out the relationships between our wiring and the things we want to do. We have theories and ideas and examples and they might work some of the time and not work other times and a lot of the time we throw up our hands in the air and say, “Do what works for you…” but there are other times when we should build on that biological understanding, if we can.

One of these areas has to do with visual processing – the way in which our brain deals with images. This is a topic that is pretty fundamental to the whole idea of this blog – the concept that drawings helps us think better – and a book I’ve been reading called Visual Thinking: for Design by Colin Ware is really quite a good introduction to the ideas here.

So, the visual cortex is the part of the brain that deals with visual areas and they have riveting names like V1, V2, V3, V4 and so on. When we’re using our vision for perception – to see and understand what’s in an image as opposed to seeing so we can move our hands or a tool – the information coming into our eyes travels along the path V1, V2 and then to V4. V1 and V2 deal with simple, universal information like colours and shapes while V4 and the inferior temporal cortex (IT) deal with more complex or specialist understanding.

What this means is that if you want to lay information out so that it’s easily comprehensible there are simple, general approaches you can take – and that’s really the foundation of good graphic design. It’s not magic or something only some people know how to do. They might have figured it out over time but in essence what good designers do is tap into the way our biological machinery has evolved to deal with visual information.

One of those things it’s had to do is lose some functionality. It turns out that chimpanzees have a form of photographic or eidetic memory that we’ve had to get rid of to make place for something more useful. A chimpanzee can be trained to see numbers and remember where they appear on a screen – something we find very hard to do as humans. What we’ve done instead is invent symbolism and representation, so we don’t have to remember as much. We’ve replaced that memory with the ability to do more complex reasoning supported by language.

Practically, I think what this means is that we can think quite complex things but we can’t hold too many things in memory at the same time – so we need external tools to help with that part of any activity. I think this happens a lot with diagrams. If you seen an overly complex diagram it’s very hard to understand it if you haven’t been taken through it or experienced the creation process. For example, when I first started writing this blog I created images like this one, which does take a little working through to understand. 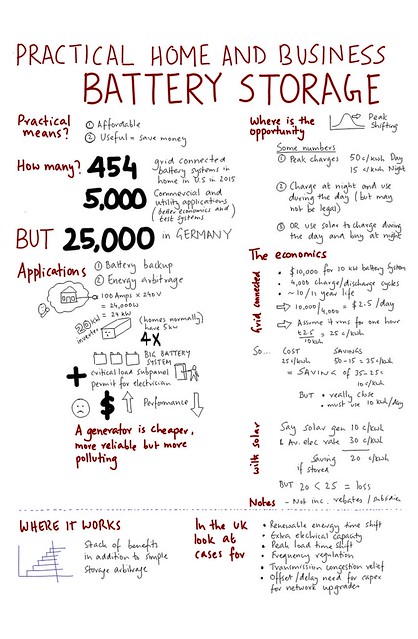 Compare that with the image that starts this post – it’s pretty obvious what the message is. It doesn’t need a huge amount of explanation other than perhaps pointing out that it seems that sleep is when we process what we’ve been doing during the day – and so it’s better to do a little work, take a day, and then do a bit more than work solidly for hours at a time. From a biological point of view it seems like having around three things is the amount of information we can instantly make sense of at a time.

As you increase the number of elements, once you get to the seven plus or minus two point you start to reach the limits of human cognition – precisely because of that part of the brain we decided to get rid of and that chimps still have. So there is a biological basis for the way in which you should design information so that it makes sense – once you have more than 7-9 items then start looking for ways you can group them and reduce the complexity – not because that’s more accurate but because it’s easier for others to process. And what we need is something we can understand, not something really clever that we find it hard to wrap our heads around.

The unsurprising takeaway then.