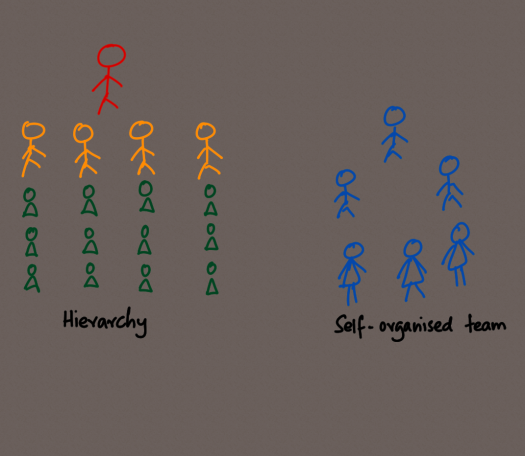 Mack: Look at this announcement for a meeting of the International Chair Haters Club. How ridiculous. Zack: What’s so ridiculous? I’m a member in good standing – Workman Publishing

What are the models we carry in our heads about how to work together? How would you characterise the inbuilt, assumed, “natural” ways we have to organize ourselves and get things done?

The most basic one, you could argue, is getting ourselves organized for defence – as a village or tribe against animals or other tribes. That means setting up basic perimeter defences and having roles for people. This progressively escalates to developing war fighting capability and modern militaries have developed sophisticated and powerful processes and methods for carrying out operations.

But fighting a battle, while complicated, is not a complex task. Yes you have to get personnel and machinery and ideally have longer-range guns than your opponent and you’re onto a winner. In essence, if you can stand back and hit the enemy while they can’t reach you, you have an advantage. And if you have to go in on the ground you want every advantage you can get – using technology and firepower. It all ends, though, when one side is finished. It’s probably a generally accepted fact that the US Military could secure any battle zone in the world in a matter of days. It’s a complicated job but they will do it very well even if there is nothing left standing at the end.

The complex task, however, and one that every military has faced in the past and probably will do in the future, is keeping hold of that zone over the long term. That’s the hard work of changing minds and getting people to adopt new ways. The fighting was the easiest bit and then everything that’s actually hard comes afterwards.

So, when you’re trying to plan for the long term, perhaps going on military doctrine isn’t the best way to get started. It works very well in a limited situation but you’re looking at engaging with people over the long term and that needs an understanding of the more complex nature of that situation. So where do we go from here?

Modern capitalism is, I think, the natural transfer of that military mentality into the sphere of social relations. Think back to how it all started. Millions of mostly men coming back in their uniforms from war and starting back in civilian life. They wore uniforms and transitioned naturally into suits – the uniforms of commercial battle. The structures of the corporate world mirror that of military hierarchy, with chiefs and sergeants and troops. Isn’t that the way most people think – in terms of who’s the boss and who’s the employee? And isn’t your entire purpose in the corporate world to climb the ladder, to be promoted into a position where you can lead others – where you have more control? Where the person at the top has the most control?

Of course, we don’t like having kings or queens with untrammelled power so we set up counterbalances. Like a Board of Directors who are, in theory, supposed to act as a check on a CEO. But, as I learned early on, having a position is not the same as having power. In the Indian constitution, for example, you have a President and a Prime Minister. I thought the President had the power to take a stand until my dad reminded me that the Prime Minister effectively appointed the President – and that told you where the real power lay. There are many Boards today that will not make a stand against a powerful CEO because they have no power. And the thing with checks and balances is that while they may work in the long term they don’t stop excesses happening here and now. You only have to look at what’s happening in two major economies at the moment to see the consequences of handing power to individuals who believe they are above the rest of us.

In the world of business and capitalism, then, I think you have a military mentality centered around control that has been transposed into the world of commerce. But what else is there that changes the dynamics of what’s going on?

It’s the concept of ownership.

What is embedded in our minds is that you have people who own the land and people who work the land. The former are rentiers, they live off the toil of others benefiting from their ability to own things. But perhaps we don’t have the picture entirely clear all the time. There are few Chief Executives who actually own large companies. If companies are listed, you have millions of shareholders who benefit from their ownership interest as the businesses grow. The businesses benefit because they can raise capital from these millions of shareholders. When ownership is distributed then the checks and balances become more important so that one group cannot leech off the resources of a larger, less involved group. The Board and Executives cannot manage the company for their benefit alone. But, of course, having control has its benefits. When you can appoint the committee that sets your pay, you have a good chance of getting a good payout.

If you start a business now you probably think in terms of these models. You’re a 100% owner and then you sell bits of the business to raise money and you give a part of the business to employees and all this helps you to grow and eventually you sell the whole thing and cash out, rich and happy. This is your basic venture capital backed business model and it has a very low chance of success, but it’s the strategy everyone wants to follow. That’s why venture capitalists follow a portfolio approach – they invest in ten, twenty businesses knowing that most will fail but one will perform and make them rich. But if you’re a business owner in that equation what are your chances? It’s not rocket science, is it? Your chances are 5-10%.

So, what can you do to increase your chances of success? Well, if you’re the kind of business that could be a superstar then maybe stick with the existing model. But what’s the most important thing you need to do if you want to succeed? Bill Gross argues that the single biggest thing for startup success is getting the timing right. That’s a sobering thought, isn’t it? You could have a great idea but if you don’t have it at the right time you won’t win.

An alternative approach is to look at cooperative models – models where you re-look at the two fundamental ideas of control and ownership. Where you create controls based on more egalitarian, inclusive principles and where ownership is replaced by a return based on contribution.

This is not straightforward at all, mainly because these approaches are not seen as relevant or practical – or perhaps you’re even a bit suspicious of anything that doesn’t look like traditional capitalism. But the thing with capitalism is that we sometimes confuse capitalism with feudalism. Capitalism is based on private ownership of stuff and how you use it to make a profit. Communism, on the other hand, is based on common ownership of the means of production. Socialism is based on cooperative ownership of the means of production. And these three violently disagree about what exactly each of those things mean and each approach has led into extremes of violence and stagnation and oppression.

One Reply to “How Does A Self-Organized Community Work?”