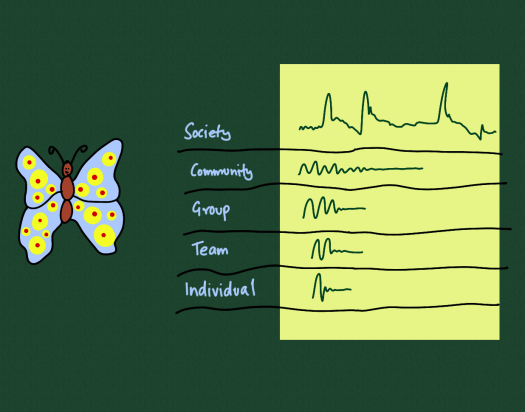 I’m discovering Seinfeld, like many other people, I’m sure, on streaming. He’s funny, he’s still relevant – because even though many things have changed people haven’t and we still have the same issues. And he explores them in a funny way. Is it witty, sardonic, a particular genre of humor? I don’t know… but it makes for good watching.

Now, decades later Seinfeld has made it to the Harvard Business Review. I point to McKinsey as the example of a consultancy firm, the people that invented consultancy as we now know it. I devoured their stuff on presentations and analysis five years ago. I still think they’re very good, I like what they’ve done with animating their visuals. But I also think that some of their approaches are still from the eighties, at least outwardly and there has been some stuff since then which might be useful to use in consultancy. The Harvard Business Review asked Seinfeld if he felt that hiring McKinsey would have helped him refine his business model.

He first asked who they were. Then he asked if they were funny. And no, if they weren’t funny he didn’t need their help.

Being funny is like having the power to look at things differently, using another lens, with a new perspective. And that’s valuable, incredibly so. Terry Pratchett had the power to do that, weaving everyday practical knowledge and management theory into his fantastical stories with a side of funny. Then again, if you’re funny, people take you less seriously and the really important stuff you’re saying passes them by.

Because things matter in different ways depending on context. For example, if you decide to do something different today – rearrange your room, for example, that’s fine. You’ll move your bed to the other side of the room, change the living room around and then get on with your day. If you charted the amount of disruption on a graph, there would be a little spike and then things would settle down.

Now, if you rearranged your team’s working environment there would be a bit more disruption, an argument or two perhaps, some unhappiness. If you did it to a group there would be a lot of discussion and angst and people would be worried about what this meant about them and their roles. And then with a community – what if you came along and decided to close down a few roads or build a bypass. That would bring out whole groups of people, supporting, protesting, complaining.

Now, would you use the same methods to resolve a disagreement with yourself about whether the radiator should go under the window or across the room as with a community working out whether a wind turbine should be in one location or another? You know instantly that the answer is no, but that doesn’t stop us thinking that because something works for us it will work for everyone else. Because we successfully did things our way it will work for the rest of society.

I think Margaret Thatcher was one of the people that was famous for saying she would run the business of government like her dad ran a corner store. But a corner store is not the same as the economy of a country and it took some time to work out the difference. From a country’s point of view some things matter more than other things. For example, right now people are stealing billions, it seems, from public funds designed to help people out. But at the same time the only thing keeping society going is the belief that things will be sorted out, that we’re still in control. The second people start to worry the toilet rolls sell out.

So what we’ve learned is this. You can make big, dramatic changes in your own life but at the level of government it’s much more about talking about what you will do than any real doing. And the doing you do is more in the way of nudging, about trying to make small changes because the ripple effects of what you do ricochet up and down the system – the bigger the system the less certain it is what will happen when that butterfly flaps its wings.

What we need to learn to do, as we engage with and try to build communities, is work out what works at different levels. Leaders go in and rock the boat, they want to bring in their approach, change everything, turn it around. And that often ends making things a little worse.

To really get a sense of what this means read these words from CNN’s analysis on the Biden transition.

“Multilateralism, diplomacy, quiet competence, scientific rigor, inclusivity, collegiality between top officials, respect for civil servants, the intelligence community and a welcome for immigrants are in.

You can have a huge disturbance for a while and then people start to realize that it takes effort to keep the peace – and it takes effort whenever you have to deal with anyone other than yourself. After all, most of us can get into an argument in an empty room.

The thing that you have to see is that rules, policies, processes are a way of moderating the amount of action you take at different levels. Rules need to emerge to cope with the complexity of the situation you are in. You don’t need rules to decide what to do at home – although thinking about it, there’s a decent change that things like Feng Shui emerged to help large joint families live together with fewer arguments.

Rules that work at one level, for example at a family football kickabout, will not work at a higher level like a league game, which needs a referee to enforce them. And at national and international levels, rules are actually laws, and there is an entire profession that makes it their duty to try and sort things out.

This lack of understanding of levels is really what causes a problem between them. For example, you have to sign this huge license agreement when using any software. It’s just not appropriate because the level at which the corporation is acting is different from the level at which you, as an individual, are using the software. That’s why I personally, for anything I use that matters to me, don’t use commercial software. The copyleft of the FSF is what matters to me.

The takeaway here is really that you need to look at communities and the rules they operate and ask yourself if they are appropriate for the level at which they are operating. The smaller you are the fewer rules you need. The larger you get, the more you need but you also need to watch how you apply them because each time you make a change you disturb things and they need to settle down before you go forward. That’s why the law is slow, not because it doesn’t want to help you but because if it goes fast it could make things worse.

Okay… now that we can see that rules should emerge when needed rather than be imposed from one level onto another let’s look at that in the next post.