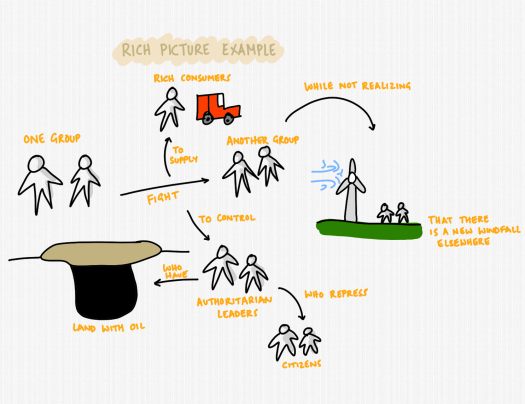 A characteristic of fluent users of SSM is that they will be observed throughout the work drawing pictures and diagrams as well as taking notes and writing prose – Checkland in Soft Systems Methodology in Action, p.45

In my last post I looked at SODA – Strategic Options Development and Analysis as a way to understand situations.

In this post I want to start looking at one facet of another method, Soft Systems Methodology (SSM), and, in particular, how you can get a “rich appreciation” of what’s going on.

In many consulting or research projects we’re going to enter situations where prior work has already been done, where “stuff” exists.

And one of the things you have to do is understand that stuff – and this is something that SSM talks about in terms of gaining an “appreciation” of what’s going on.

And one useful technique to do this is to draw a rich picture diagram – a drawing of what’s happening.

Now, the literature in this space is contradictory and confusing – I know that my own understanding has changed over time.

For example you’ll find some examples of what I call rich pictures in this site are actually closer to cognitive maps.

In the last post I explored how you could build a cognitive map from what someone told you, the statements and links they talked through can be captured and shown on a piece of paper and the resulting image that emerges shows both of you a view of what is in someone’s head.

There is a question about whether this view existed already – did you discover it – or did the two of you construct or create it?

Now, once you’ve worked away to discover or construct a point of view – however you want to take it – then you want to try and make sense of it, look at it, talk about it, debate it and come to an agreement about how you all think about.

A rich picture is a little different – in that it is a representation of something that is probably already there – you’re just showing it in a different way.

For example, the Economist September 2020 issue has a number of features on the future of clean energy.

Now, you could read all the material in there – it’s been painstakingly written by experienced journalists.

There was also a Financial Times article published in the same month about a dramatic fall in BP’s share price – because of fears that BP’s oil revenue would fall as the world shifted to clean energy.

Now, how would you start to make sense of these stories.

The rich picture in the image above is one way to draw what’s going on in a way that pulls from what’s being written and discussed in the media to help us make sense of what’s going on too.

Take a look at the picture.

Is it relatively self-explanatory?

If I tried to talk you through this in words, then I’d be saying something like for the last century different groups have tried to control the Middle East – the US and UK provide financial and military aid to Saudi Arabia while Russia supports Iran.

They do this because they want to control the oil in those regions – that’s why they supported leaders like Saddam Hussein in Iraq for a long time, leaders who repress their citizens.

You see this pattern often, where resource rich countries have this kind of setup.

And the countries and companies that control the people who control the land do this because they can then have access to the resources they need to supply rich consumers.

This has been the fundamental geopolitical issue of the 20th century – the battle to control energy supply.

But things are changing, the clean energy alternatives mean that the land which is valuable is not where there is oil but where the wind blows and the sun shines – different lands, owned by different people.

And so the companies that controlled the oil lands, like BP, are now having to scramble for the new lands and because they didn’t do this early enough their share prices are being hammered.

Now, the last seven paragraphs are a condensed view of what’s going on in writing – but there are still nuances – you could write entire books on this subject.

I have a few upstairs – thick volumes – close on 900 pages I think.

Now, if you’ve had the patience to read all these paragraphs, look at them again as objects in themselves, as artifacts of interest.

The rich picture by itself – is it enough, does it need more, could you make sense of it?

The words – were they enough, did you get it, was it complete or comprehensive?

What about both together – was that useful, did it help make sense, could you see the connections better?

Now, think about how you might use a rich picture diagram in a situation.

You could read all the background material available, make notes.

If you do enough interviews you might find that things keep on turning up, you see patterns – of people, of objects, of institutions, of information flows.

So, perhaps you capture these in a picture – one you can point to and say this is what we see from our research, what do you think?

But there’s no hard distinction, rather a blurring – a cognitive map can have pictures too – and at some point you go from one to the other but what you call it, and when you call it one thing or the other, really depends on you and the situation and whether anyone cares what it’s called or whether they just want to get on and do the work.

But if you’re interested in this kind of stuff and want to become a better listener and have better conversations then knowing the difference and knowing what you do and how you do it is probably a good idea.

There’s no real prescription here – do it this way and it will work type of thing.

The point is that pictures can help you capture things that would take a long time to do in words – so it seems like a good idea to try and use pictures when that helps.

They don’t need to be art – it’s a thinking tool and you can do a lot with simple shapes and lines.

As you can see on almost every page of this blog, I hope.

Now, so far, I’ve looked at cognitive maps as a way to map out what people say – which focuses really on words.

Then we’ve looked at rich pictures as a way to show entities and people and patterns and connections.

The next tools to look at are models, and there are two kinds of models – broadly speaking.

One is a mathematical, numerical assessment of a situation – an influence model – and I think it might be worth looking at one method for doing this well – because it’s hardly ever taught.

And then there’s a model for thinking systemically – holons.

I’ll cover these and how to use them in the next two posts.