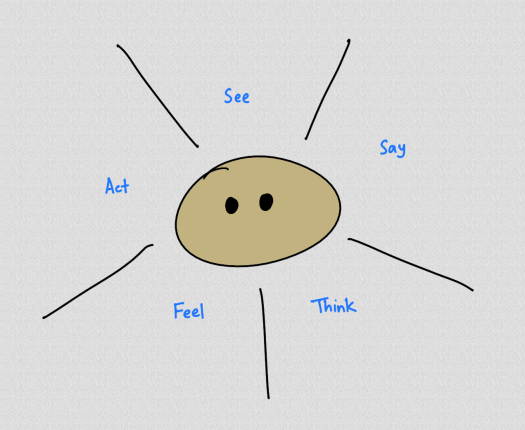 …that the world is not as it seems, that we know the world only through our own cultural biases, that even the little things matter, that taken together all the little things we do make the world what it is, and that if we are willing to challenge ourselves, truly understand others with empathy, and shed the comfort of our familiar but sometimes blinding, binding, and taken-for-granted assumptions, we can make the world a better place. – Michael Wesch

How do we truly understand someone else?

We can try and appreciate what they take in through their senses but we will never really know what is going on inside their heads.

Being obvious versus being familiar

One of the biggest mistakes we make in many aspects of life is thinking that there is a “natural” or “correct” way of doing things.

For example, it may seem obvious to you that a gear shift should look and operate in a certain way but that hasn’t always been the case.

In the early days of automobiles they were all over the place and the French car market Citroen seemed to delight in creating unexpected ones.

Over time, people have come up with interesting and beautiful variations on this concept.

But which one is “right”.

None, really – we’ve settled on one as the competitive battle between manufacturers settled down and the winners converged on an approach.

The thing to remember is that what seems obvious to you now has more to do with the fact that you are used to it – you don’t know any other way of doing things and so you take it for granted that this is the right way of doing it.

That’s a way of thinking called ethnocentrism – thinking that what you believe, think, value is the approach that’s true, the one that everyone else should take.

If you are part of the majority culture in any situation, you can be blind to your own ethnocentrism – you see nothing different.

You often need to go into an entirely different culture to really see – to have your eyes opened – to just how much of the way you live your life is based on unquestioned assumptions and beliefs.

And you will run into people who look at you with puzzled incomprehension as you act in the way you think is right and proper and they wonder what is going on.

If I said to you, “Pass the salt,” your first reaction as a native speaker is probably going to be negative.

Where’s the “please”? Who do you think you are?

The thing is that the first language of the speaker may have no such thing as a word for “please”.

Using the word please indicates respect for the other person – it is a request, not an order.

Some languages have respect built in as a feature, when you speak to someone else there are elements like prefixes and suffixes you add to indicate respect.

To such speakers constantly saying “please” can be harsh and grating – it comes across completely differently from the way it was intended.

The way to be less ethnocentric is to practice empathy – the way anthropologists do it.

It’s understanding the way in which they understand the world in their terms.

And it’s a powerful tool to help you with your career and business.

Developing empathy with someone else

Can you project yourself into the life of your prospect?

What does the world look like through their eyes?

What do they see?

Now, it’s easiest to do this if you have already immersed yourself in their world for a while.

If you have spent time in their culture, worked with them before, observed them for a while, then you’re going to be able to create a more accurate picture of what’s going on.

The best business people don’t guess what someone else wants – they know because they know their prospect’s world already.

That’s why you first start with research, desktop research if that’s all you can do but ideally you interact with and talk to your prospects to understand them, well before you try and sell anything to them.

But let’s assume you’ve done some homework, you aren’t just guessing, what do they see?

For example, let’s say you provide a technology consultancy service, how would you describe the way the person you want to talk to – a CEO or founder – will see their world?

Let’s use the empathy map in the image above as a scaffold to think through this question.

If they are a decision maker, they probably have quite strong opinions.

They’re probably very interested in knowing about the latest stuff out there, the innovations that are changing the landscape for their business.

At the same time, they are veterans, they know that many fads fizzle out and they don’t want to waste their time.

They’re sceptical about whether things will actually work out – so while you’re touting all the features of what you do they’re thinking up ways it could break or go wrong.

They speak their minds, asking tough questions to test what you’re saying – it’s their money on the line and so they aren’t shy about saying no.

In fact, they probably say no to most things.

They’re probably quick thinkers and can see the pros and cons in a situation – but perhaps don’t always see all the details.

Because of that they rely a lot on their feelings – about you, about the situation.

They listen to their gut – if something doesn’t feel right they won’t do it.

But when it feels right and they smell an opportunity they will act decisively and quickly.

Now, how would you pitch to this kind of individual.

Well, you’d better be quick and on point and lead with what’s important to the listener.

But this will also probably only work in certain cultures, especially Anglo-Saxon ones.

In many European and Eastern cultures there is less focus on a single decisive individual and more focus on participatory decision making.

Which will require a different approach from you.

One that understands that your prospect sees the world around them as a web of relationships, how they are careful not to say things that shake that web, how they think long and hard before they say anything, and how perhaps feelings are expressed indirectly as reservations and how an action is taken only after a consensus has been achieved.

And that’s just geography – it gets more complicated as you factor in history and race.

But that’s the point of being human – you might as well spend the time understanding how other humans tick – developing empathy with them.

If you can get to them in the first place… which is where lead generation comes in.

Let’s look at strategies for that next.

One Reply to “How Well Can You Empathise With Your Prospect Or Customer?”