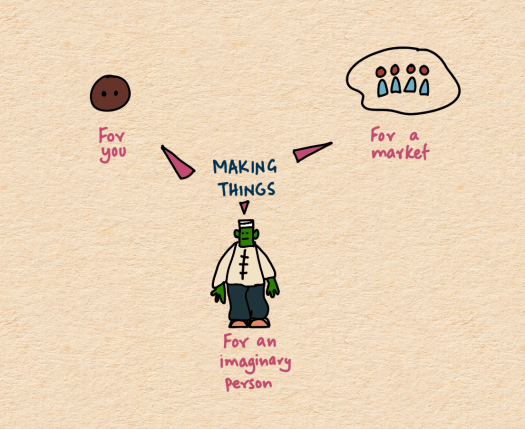 The aim of marketing is to know and understand the customer so well the product or service fits him and sells itself. – Peter Drucker

I said that I would start looking at risks in my last post and perhaps a good one to start with is the risk of spending time and effort making something for which there isn’t a market.

Most of the business ideas that I have come across seem to fall into three categories.

First there are the people who build something for themselves – they “scratch their own itch.”

Then there are the people nwho know there is a market out there for what they’re creating – they just need to get in front of the right people.

And finally there are people who create for a market that they believe exists out there – and they construct an imaginary person, a persona or archetype to focus on.

There are pros and cons with each of these approaches so how do you work through where you are and increase your chances of success?

When you are your own customer

When you make something for yourself, the good thing is that you know there is at least a market of one.

Many great ideas start off this way – people creating products and services because they need those things in their lives.

The iconic example here is Apple.

Steve Jobs had a vision of the kind of portable computer he wanted and that eventually became the family of products which include the iPad and iPhone.

The great thing about this kind of approach to getting started is that you already know about yourself, you know how you see the world and what is missing there.

If something isn’t working, something could be better, something would make life simpler – that is something that you could work on as a project.

Something they want and are willing to pay for.

And find that you’ve created a viable business along the way.

Tapping a market you understand

The second way of getting started is to build for a market that you understand really well.

Rather than thinking of that group as a market – which brings up images of a place where transactions happen with no connection between buyer and seller, think of it as creating something for a community – people that are held together by things they have in common.

The key thing to have when you are creating for that community is empathy – you have to be able to see the world the way they see it.

The easist way to do this is if you are part of that community already, if you can see what’s needed and go about fixing it.

Inside a company, for example, this might be what you call an intrapreneurship role, where you create something new from inside the group.

If you aren’t part of the community they you need to learn about the way they see the world before you can really help.

You have to talk to them, participate in their world and you will then start to build a model of what you think they see.

And if what you see matches what they see then what you make has a chance of being what they need and are willing to pay for.

Building for an imaginary person

Now, most people will argue that they’re creating something for one of the first two reasons – for themselves or for a defined market.

But it’s easy to fool yourself sometimes.

For example, a big part of marketing is segmentation and targeting.

Or, more simply, just saying something like, “Everyone is going to want this.”

I think this leads to two kinds of errors.

The first is to create a glossy, glamour magazine style picture of your consumer.

This is inevitably shallow and biased – based on the media and images that tend to dominate what we see.

The second is to pull together a bunch of factors that make sense in isolation but don’t work so well when you put them together.

A sort of Frankenstein’s monster of a customer.

You might think that this is an exception, but it’s often the first thing many people do.

They create things that they think people will want.

And crucial word is “think” – you can spend a lot of money on something you think is needed before you realise that you were wrong.

The way to improve your chances of succeeding is to move from thinking something needs to existing to knowing it does.

If you’re building for yourself, then it’s relatively easy – you can make it, use it, see if it makes your life better.

As long as you don’t fall in love with the idea and can stay somewhat objective you’ll end up with something that might have a future.

If you’re building for a market that you either already know well, or take the time to get to know well, then you’re going to be able to make something useful for them.

The final category is the dangerous one – the one where you spend time because you think or believe that something should exist.

This is the tragedy of the inventor who makes something that no one wants or needs, right now anyway.

And the key to changing this is developing empathy, seeing the world the way someone else sees it.

When you see the world the way that your prospective customer sees it, then you’ll be able to build something that fits into their world – something they want and are willing to pay for.