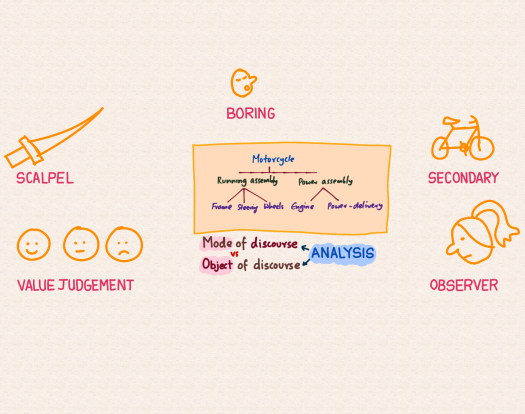 If you’re read this blog for a while or glanced at the intro you’ll know I’m interested in Systems Thinking.

This is something that many people have opinions on – and don’t really agree on as well – all over the Internet you can find proponents of different schools of thought sniping at each other.

But, what are they saying and why is it so hard to understand?

I saw a social media post recently that tried to use the language of Systems Thinking to describe what’s happening around us right now with the Coronavirus, and it reminded me of an important bit of Robert Pirsig’s Zen and the Art of Motorcycle Maintenance.

And that’s the utter futility of trying to explain something you understand to someone else.

I keep trying to take courses on Coursera – thinking that this will help me pick up a skill I lack.

I elect to audit the course, try a few bits and then recoil – utterly and totally bored by what is in front of me.

And that’s because I think the teachers try and break things down into teachable chunks – they create modules and divisions and ways to introduce you to the subject bit by bit.

This is the way of analysis, breaking things down and then dealing with them piece by piece.

Analysis has something to do with understanding through discourse.

Pirsig explains that you start to notice some weird things when you stop trying to use analysis and look at it instead as an object in itself.

And he uses a motorcycle to explain the idea.

For example, if you wanted to analyse a motorcycle you’d break it down into its parts – a running assembly and a power assembly – and then break those down further, into frames, wheels, an engine, the chain and so on.

Isn’t that what people do when they try and teach you anything?

Break language into grammar and nouns and verbs. Break martial arts into stance and footwork and punches?

And the thing that you notice first, the thing that’s loudest and most in your face is just how crashingly boring all this is – just like I found with the Coursera material.

But, says Pirsig, if you get past this you notice a few other things.

All this description only makes sense if you already know what the person is talking about.

If you look at my picture, for example, can you tell if it’s a motorcycle?

Of course you can – because you know what one is – but if you didn’t you might accept the idea that a motorcycle is a bicycle with a human providing the power assembly.

The next thing about analysis is that it gets rid of any human observer.

So, no one tells you how someone came up with this rule that means you now write the way you do because they misspelt something in a play that went on to be famous.

Analysis also forgets to think about making value judgements – is this good or bad, pure or not?

And finally, this analysis happens to have happened this way because someone chose to use this particular way of slicing things up – they used an intellectual scalpel that you just don’t even see.

Now… if you’ve read this far and don’t know what I’m talking about – that’s because you don’t already know and haven’t read Pirsig’s book.

So here is the point to take away.

Let’s say you want to teach someone to write a novel – don’t start by breaking down the process into pieces.

Get them to start writing instead.

Give them a prompt, a topic, ask them to magic a few hundred, a few thousand words out of thin air.

Then start to teach – because they now have something they know – which they can then understand.

I remember back in engineering school getting passing marks in an exam by writing about relays – even though I had no idea what one was and had never seen one.

You can fool people some of the time if you simply recite what you’ve memorised.

You can do courses and learn the structures and look like you’re doing great.

But you can’t fool yourself – and you know inside that you don’t know.

And you will never know until you’ve done the work.

Do the work first – and then try to understand what you’ve done and how you could do it better.

That’s the way to think better, to do better and, eventually, teach better.