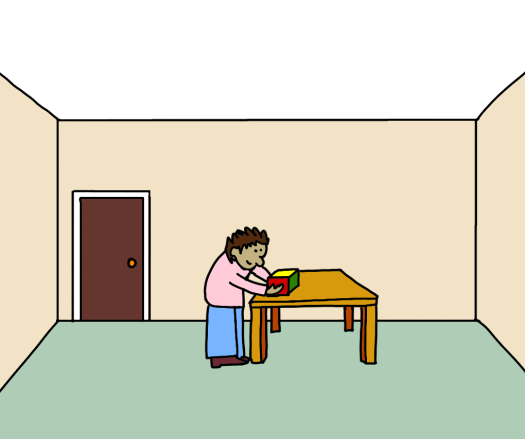 Write it. Shoot it. Publish it. Crochet it, sauté it, whatever. MAKE. – Joss Whedon

Have you ever wondered why you do what you do?

Many of us never set out with a grand plan for a career – we might have chosen subjects in school that worked for us – and ended up taking a temporary job but somehow staying there for a couple of decades.

I’m not sure I know that many people who really had a clear idea of what they wanted to be when they grew up.

I’ve seen one – a little boy who writes and draws stories – and who wants to be a writer when he grows up.

The rest of us tend to muddle through somehow – taking whatever route seems like the path of least resistance.

I found a book on that by Robert Fritz called The path of least resistance – which has an interesting little model that’s worth keeping in mind.

He asks why Boston is laid out the way it is – streets going this way and that.

He says it’s because the first paths were trodden by cows as they went about their business.

A cow, seeing a hill, doesn’t see it as a challenge – something it must climb – it simply finds the easiest way to get around it.

And this, Fritz says, should help you get three key insights.

The first is that animals, people, things, follow the path of least resistance.

The second is that the path they follow is determined by the terrain, the structure they’re in.

A river, for example, follows the terrain, the contours of the land as it makes its way from the heights to the sea.

The third insight is that you can change your terrain to something that works for you – something animals and rivers don’t really think too much about.

What all this leads to is an answer.

An answer that says that the reason you are where you are right now is because you took the easiest path given your environment – the structure of your life.

I don’t know what you do – but the chances are that you’re happy doing it, or not happy.

If you’re not, then the question I think that’s worth asking yourself is “What did I make today?”

I think if you really want to get in touch with yourself – you have to figure out what the creative part of you wants.

If you’re not sure what a creative part is – just watch a child.

Children just do this – they play and imagine and make things up.

And sometimes, they make things.

Children get bored and crabby when all they do is watch telly.

They light up inside when they make stuff.

And I think we do as well – I know that when I create something I’m a lot more satisfied than when I don’t.

Creativity for me is writing, drawing and programming.

Sometimes you’re in a job where you don’t get a chance to make stuff – you’re busy getting other people to do things, moving stuff on, chasing, brokering, selling.

So, perhaps there you need a hobby – as many people do – they create and make in their spare time to make up for what they don’t get at work.

So, here’s the thing.

I have a theory that if you end each day knowing that you’ve made something that didn’t exist when the day started – you’ll be happier.

But first, you need to make it possible to do that.