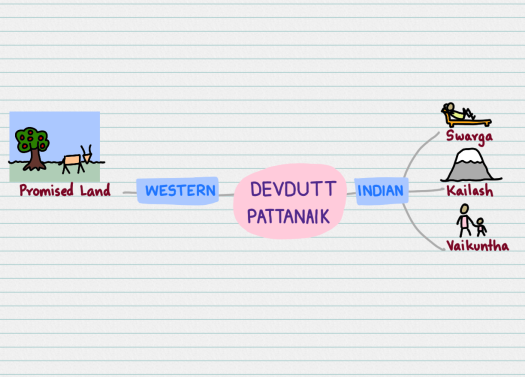 American management thinks that they can just copy from Japan. But they don’t know what to copy. – W. Edwards Deming

Today I came across a TED talk called The Indian approach to business by Devdutt Pattanaik, an Indian author who writes on mythology and management, among other things.

I have, elsewhere in this blog, written about how I have been increasingly disillusioned by goal-driven positivist approaches to life and business.

You know, the kind of thing where you write down a goal – a specific, measurable, achievable, realistic and time-bound one – and the universe moves everything to get it for you.

It doesn’t quite match what happens in the real world.

Some people get there but it’s not clear if that’s because they’re lucky or because had goals.

Now, the thing is that management books are mostly written by Europeans and Americans – and they have a particular intellectual and cultural heritage.

Pattanaik argues that the way people think in the West is heavily influenced by their Christian upbringing.

In particular, people are brought up with the idea of a promised land – one overflowing with milk and honey – one that is reached after a long journey following a visionary leader touched by god.

The leader has a vision, a mission and his (it’s usually a he) followers must do what he commands unquestioningly.

If you look for the equivalent intellectual infrastructure in India you have to turn to the stories – the mythology of Hinduism.

And here, Pattanaik found, there are three types of promised lands – not one.

In the first, Swarga, you get everything for nothing.

You can put your feet up and ask for anything and your wish will be fulfilled.

It’s paradise – but it has a problem.

It’s constantly being invaded or waging war or trying to stop someone else – although it has plenty, it’s always afraid that it might lose it all.

Technically, the god that rules it, feels that way…

Then you have Kailash – high atop a mountain.

This is where you go when you no longer want anything, when you have gone beyond desire and can live in total simplicity.

It’s the kind of thing a monk would do.

The third promised land is Vaikuntha – a place of love and harmony and service and peace.

This is where you put others first – serve them without thought of reward.

So, in Indian mythology, you have these three possible outcomes – you get everything you want, you want nothing or you serve others.

What I suppose I hadn’t realised, until Pattanaik articulated it using this model, is that I come from a place programmed with a default mode of thinking based on these stories.

My inherent programming is to head towards Kailash – to the place where you want nothing – live with what you have, within your means, desiring as little as possible.

Others are programmed differently – perhaps aspiring towards wealth and plenty or looking to serve others and live in harmony.

And that leads to some interesting outcomes.

In the West for example, as we go through the impact of the coronavirus pandemic, you see organisations responding in different ways.

Some reach out to their employees, effectively offering love – something that is rooted in Christianity.

Others put themselves first, protecting their owners and shareholders – where does that come from?

It’s easy to argue that it’s a modern, atheistic thing – rooted in biological thinking – a dog eat dog world, survival of the fittest and so on.

Now, I’m not sure this model tells you how to do things.

what it does suggest is that the way you think now is because of the stories you heard when you were growing up.

Which is different to the way modern management theory works.

The stuff you read in textbooks now will either be stuff someone’s come up with that they think is cool, or something they believe is rooted in some form of scientific approach.

Peter Drucker is a good example of this type of thinker – combining field research with thoughts about human relationships.

Robert M. Pirsig, on the other hand, in his book Lila introduces you to the idea that what it means to be “American” is actually based on the ways the Native Americans thought and acted rather than the European ways that the early settlers brought with them.

It’s a slightly longer argument than that…

But it supports Pattanaik’s central argument – myths matter and the stories that people grew up with affect the way in which they act as grown ups.

What this tells us, a little like the Deming quote above, is that it’s not enough to copy what people do – we need to try and understand the thinking behind why they do it.

Maybe it’s time to revisit some of your own childhood reading – and see how it’s made you the person you are now.