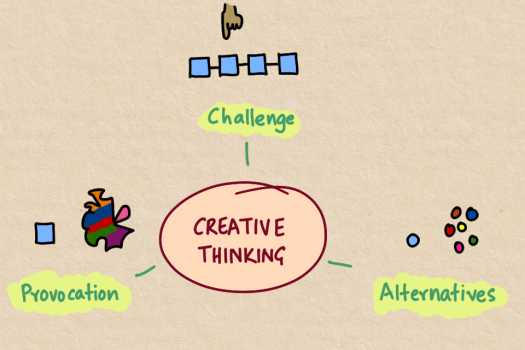 If you are in a difficult place right now then it may be time to start being creative.

But how do you go about doing that – surely only some people are creative and the rest aren’t?

That isn’t the case, according to Edward de Bono – as I dug out his book Serious creativity to remind myself how this works.

I’m not always sure what to make of De Bono’s writings – apparently he’s very clever and he seems to think so.

Lots of people copy his ideas, he says, and he came up with lots of stuff before science caught up.

So, I don’t know – but I watched a video of him talking and drawing once – and well – you might as well listen to his stuff and judge for yourself.

He says that you can deliberately be creative – you don’t need to sit around and wait for inspiration.

What you’ve got to do is get your mind out of the grooves it’s currently rolling along – look at things in a new way.

There are three main approaches he suggests: challenge, alternatives and provocation, along with tools that help you with them.

You’ve probably heard of a few of them – six thinking hats, for example.

But right now I want to look at the top level criteria and see where that takes me.

This comes down to looking at everything that is the way it is now – and asking why it is so.

Why do you do things a certain way – why is that process followed – why do you create this document?

In many jobs in many organisations you do not have permission to question what is happening – to question the status quo.

If you do you will probably get told off.

That’s the way we do things around here and all that.

But, you have to give yourself permission to question, to be a pain in the proverbial – if you want to do something different anyway.

Then you have the idea of alternatives.

At one time you had to rely on yourself for all this thinking.

These days you have the Internet on your side.

For example, I once wanted to get a microphone holder – but was too cheap to pay.

It turns out that if you bend a coat hanger in the right way you get a very effective, zero cost microphone holder.

And finally you have the idea of provocation – starting with the opposite approach or a confrontational option.

Right now a provocation many are using is “I run my business from home”.

Such a provocation will often result in many thoughts about why it’s not possible – and you have to work through them to get to the new ideas that are possible.

Our way of life as we knew it is being put on pause.

It is time to get creative.