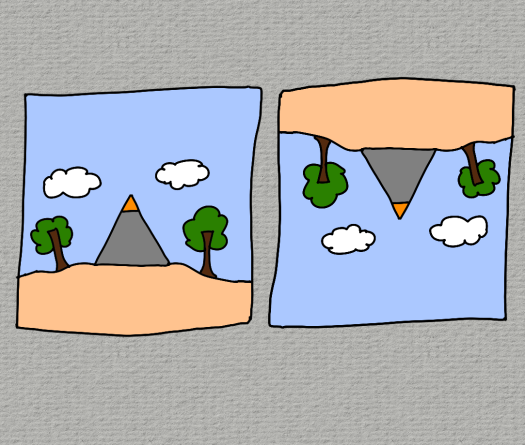 The internet is a total inversion of television. It’s the opposite. – Joel Hodgson

I was reminded of the words of Charlie Munger recently by a Twitter thread by Tren Griffin.

One of Munger’s messages – one that he’s been talking about for decades now has to do with the idea of inversion.

Many hard problems, Munger said, “are best solved only when they are addressed backwards.”

Why is this, and why should we try and learn what this means?

Our brains try, it seems, to minimise the amount of thinking we need to do.

It makes little sense to use up lots of glucose every time we need to solve a simple problem, like how to tie a knot.

So, our brain takes shortcuts.

It embeds actions in muscle memory so we no longer have to think of things like which keys to press when we type or how to walk.

It creates pathways – physical ones that we get used to walking down.

How often do you take the same route to work without thinking of the alternatives even if they might be better in the circumstances?

We are creatures of habit – we like to do things the same way most of the time and can sometimes get quite uneasy when jolted out of our routine.

Just think back to what happens if you don’t get enough sleep or are hungry – it usually ends with you being irritable.

Routine and habit are good but they don’t prepare you for something new – what they do is help you get on with the reality of the here and now in the most efficient way possible.

But, we can get so comfortable that we start to see only what we expect to see – even if reality is changing right before our eyes.

A good way to see how this works in reality is to try drawing.

Most people, if you ask them to draw a house, will draw an image from their childhood – a square with a triangle for a roof, a door and two windows, something like a face.

No house looks like that picture – but we still draw it that way.

Try and draw a table, a horse, yourself, your children from memory and you will find that you rely on shortcuts – shapes that represent what you think you remember.

One child has wavy hair and the other straight.

A table and horse both have four legs and then seem about as straight as each other.

Our mind shields us from the enormous amount of information that exists in reality by creating representations, models, shortcuts in our mind.

But then we make the mistake of confusing these models with reality – and choosing to believe what the model tells us rather than taking in new knowledge that might have a different view.

That’s why people were burned for suggesting the earth wasn’t flat.

Now, when it comes to drawing a good way to start seeing more clearly is to turn the picture upside down, something Betty Edwards teaches in her book Drawing on the right side of the brain.

Try it yourself – look at the picture that starts this blog.

In one image the scene is clearly recognisable and you see and take in what is there.

In the second your eye sees something that is not entirely obvious and is probably drawn to that tip in the centre as it tries to figure out what is going on.

If you just had the second picture you would have had to look closely and see it for what it is rather than what you think it is.

This idea of inversion has a similar effect.

Imagine you need to think through the security system you’re going to put in your house.

For any strategic question you ask it’s possible to invert it and try and see what it looks like backwards.

Instead of asking what you should do to lose weight, you could ask what must I do if I want to gain weight as fast as possible.

Instead of asking how can I cut emissions at my company, ask how can I make sure that it’s impossible for me to lower my footprint?

Looking at things this way forces you to stop relying on things you already know.

Instead, you might start to look at what is in front of you with fresh eyes – seeing the same thing differently.

And in doing so you might come up with completely different answers to what you might have done if you use the same old ways.

Always remember that armies train to fight the last war.

What do you need to do now to make sure you fail in life?

And once you know those things – perhaps you should consider trying to make sure they don’t happen.