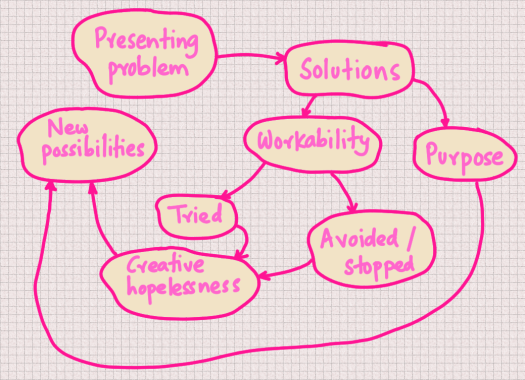 I remind myself every morning: Nothing I say this day will teach me anything. So if I’m going to learn, I must do it by listening. – Larry King

I’ve been thinking for a while on how to get better at listening – and what kinds of models might help.

But first, why bother with something like that at all?

There are a few reasons.

Let’s start with Zig Ziglar’s maxim that “You can get everything in life you want if you will just help enough other people get what they want.”

But understanding what other people want is not as easy at it sounds.

Many situations we end up in are actually quite complex – they have multiple stakeholders with multiple points of view, a range of pros and cons that need to be evaluated and often a choice between a worse outcome and an equally bad one.

What we’re trying to get at is what Peter Checkland called a “rich appreciation” of the problem situation – a picture that is “as rich as can be assembled in the time available.”

And this is something different professionals have much experience doing – although from their own specialist points of view.

They ask questions to do this – questions that probe and push and all too often stop being useful.

For example, I heard an interview the other day where a reporter was trying to show that a leader of a major political party would not use the armed forces under any circumstances.

He pointed out that the person in question had always voted against military action.

He then went on to ask whether the interviewee knew differently – quoted the various wars that the person had voted against and generally suggested that the person’s approach was “A Bad Thing.”

But is that really the case?

Is it so bad to believe that war is absolutely bad, that sending people to die should be avoided – that wars often make things worse rather than better?

Is it always better to have a jingoistic leader who is happy to send your son or daughter to fight and die in a far away land while their own children sip champagne by the sea?

The person being interviewed didn’t really have any good responses – but the point really is that the whole thing was shoddy journalism – something that was stretched out to make an unnecessary point rather than to critically examine the issue itself.

So we probably shouldn’t look to journalists for best practice here.

What about therapists – people who listen professionally?

I had a look through Learning ACT : an acceptance & commitment therapy skills-training manual for therapists to see how they go about it.

The problem with our common sense approach to problems, the authors write, is that we try and “fix” things.

When something bad happens we try and avoid the events that started everything or push away the bad thoughts that come with them.

If your friend let you down when you were a child and as a result you stopped trusting people and never made any more friends that is probably not the outcome you had hoped for in the beginning.

The book talks about an approach that is more about looking without judgement at what is going on and accepting it – to then move on.

Imagine you’re a small business owner and want to grow but are struggling to win new clients – that’s your presenting problem.

The therapist will then ask what you’ve done so far – what solutions you’ve tried.

As you talk through these she’s trying to do two things.

The first is to divine the purpose behind your actions.

What is it you want from this growth?

Is it more money? The ability to sell? Thoughts that you can employ people and free up more time for your family?

The second is to understand how well things are working or not working.

Have the things you tried worked?

Have the things you avoided helped?

Have you tried joining networking groups?

Have you tried cutting down on TV and spending more time connecting on social media?

The thing is that you wouldn’t be in therapy if everything was working.

But the therapist has to listen to you talk about your solutions and how they’ve panned out until you realise for yourself that they’re not working.

All the things you’ve tried, the bag of tricks, the hacks and shortcuts and routines, the investment, the sales teams, the email campaigns – none of them are getting you the results you want.

That’s a good point to reach.

Because that’s when you can open up to new possibilities, new approaches that are perhaps more in line with the purpose that sits underneath what you do, a purpose that might not have been fully visible to you until it was pointed out.

The thing is that any response by the therapist during this process that gets judgemental, argumentative – that tries to fix things will backfire as the other person stops, gets defensive and attacks or retreats.

They don’t make it through to that all important point where they realise that things have to change – where they have to be done differently to move on.

And they stay stuck.

That’s a kind of stuck that keeps you in place – things just haven’t worked again.

Creative hopelessness has a chance of getting you moving.

And the possibilities can suddenly be endless once again.

And you made that happen.