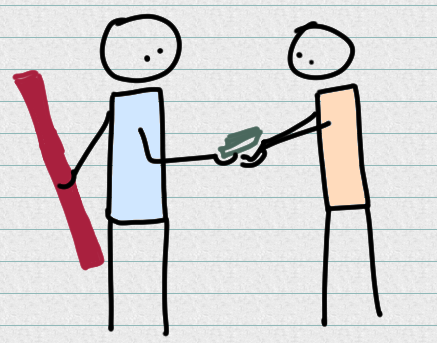 What story comes to mind when you’re asked how money was invented?

Do you think of smiling traders in a market trying to exchange a goat for a bag of cotton?

Can you imagine the discussions, the debate over how many bags of cotton were equivalent to one goat?

And how someone then came up with the idea of money so that you could figure out the value of goats and the value of bags of cotton using money and exchange coins for whichever one you wanted more.

But is that really how it all happened?

For an alternative view you might want to look at David Graeber’s book Debt: The First 5000 Years.

Graeber argues that we might have the order in which things emerged all wrong.

Bartering and the use of money, the kinds of things we think of as the earliest types of exchange, are perhaps later inventions.

What came first was debt.

I suppose this makes sense if you imagine that you’re living a few thousand years ago, before the invention of money.

If you wanted some milk and your neighbour had a cow, you might borrow some.

If your neighbour liked you, they might give you some, and at some later date you’d reciprocate, perhaps by giving them some eggs.

This idea of giving people something and getting something in return later seems more natural than the idea that there is an exchange taking place in real time.

After all, people rarely wander about carrying eggs, hoping to exchange them for milk.

So, everything probably started by small transactions based on debt between people who knew each other.

Bartering must have been created later to solve the problem of trading with people you didn’t know, where you exchanged things of equivalent value.

And later, when money came along, you could buy anything for sale as long as you had enough money.

Graeber’s point about debt is that it’s something that’s created between people who trust each other – where there is a relationship and so an expectation that the debt will be repaid.

The obligation is on the lender to ensure that the borrower is capable of repayment, and one way to do that is to lend money to people you know.

The problem starts when you want to lend money to people you don’t know.

At that point, you want to make sure that you can force people to pay you back.

Which leads inevitably to the use of violence – and the kinds of institutions and practices that have been seen over the years in country after country – debtors prisons, and slavery in various forms.

Now you say, surely there should be a moral obligation to repay your debts.

Yes, perhaps, if you are able to.

But if you can’t – then whose fault is it?

Is it your fault if you borrowed money to plant crops on your smallholding and then a bad winter destroyed everything you had?

Or is it your fault if you live in a country where a dictator borrowed money from various countries and then was deposed – do you as a citizen still need to pay back that debt?

The international community thinks so. It must otherwise it has a problem.

For example, Haiti – the world’s first independent Black republic – was forced to pay the equivalent of $21 billion from when it gained independence in 1804 from France all the way to 1947, effectively at gunpoint as an independence debt.

Debt then, when used well, is founded on relationships – on a promise to one another.

When used badly it is founded on violence.

Graeber argues that the way in which governments have dealt with this is to remove the more abusive aspects of debt based violence while keeping the obligations to repay in place.

A more human approach, he suggests, is to remove the obligation to pay debts.

And instead ask lenders to make better choices about who they lend to and why.

And for those too poor to do anything other than borrow – they need help from society, not a lifetime of debt.

The ideas in this book are not familiar – not intuitive – about things that are fundamental to our lives.

It’s a point of view still worth thinking about.