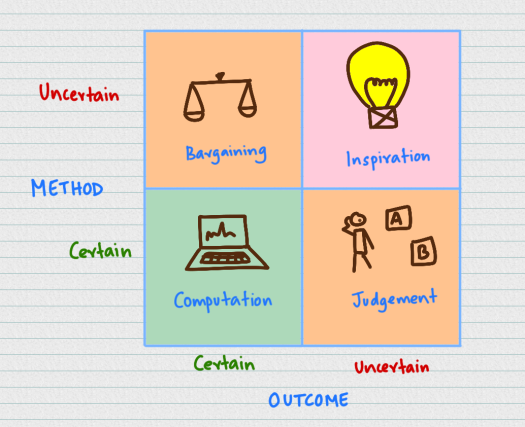 I started my career as a geek – and I’m still one, really.

In 1997 and 1998 I was installing Red Hat Linux and Slackware and discovering the command prompt.

I did programming work for money and even though I disliked how slow and clunky tools like Microsoft Excel were that’s what most people used and what they paid you to use for them.

But what I also learned as I spent more time working was that the ability to do stuff using a computer had much less commercial value than it might seem at first glance.

Don’t get me wrong – computers are incredibly useful and I couldn’t do any of the work I do without the tools and hardware we have today – especially the whole world of GNU/Linux.

But they’re useful mostly for programmers and the things that make my life easy are not things you could or would wish to sell.

For example, are you interested in how to use awk to create an electronic index card program?

It’s pretty easy – but the answer to that is probably not.

The fact is that you don’t find many programmers running things – especially not programmers that are still programming.

At the same time many people believe that being smart and being technologically capable qualifies you to have a view on the best way something should be done.

You’ve got a model – a complex one, maybe one based on artificial intelligence. The model says you should do X, so there you go – problem solved! Pay up.

But there’s a weakness here, a weakness set out in the book Rational Analysis for a Problematic World edited by Jonathan Rosenhead.

This has the depressing line for those who believe that their technical capability is important.

For these people, Rosenhead writes, “…it offers a reliable downhill path to the role of minor technical auxiliary.”

In other words, if your skillset is based around being technically smart you might want to think about hiding that from other people.

And the reason for that is shown in the picture above.

There are two things to think about: what you want to happen and how you are going to make it happen.

That is, you need to think about the outcome and the method.

If you know what you want and you know the best method to get there then the task you have to do is a computation.

Do the analysis and work out the best option.

For example, if you need to route your truck through several cities and need to work out the best route – that’s a job for your technical expert.

Now, let’s say your expert says that there are three different algorithms that produce slightly different results what do you do?

In this case the outcome is the same – the shortest route but the method to use is uncertain.

So, you go into bargaining mode and ask what the pros and cons are and what you can do to minimise the downside.

Eventually, however, you make the call on what to do.

Another situation you might face is when the method is clear but the outcome is uncertain.

For example, you might have a fund with money to invest but you’re looking at two different sectors – biotech and property.

One has stable returns but little prospect of explosive growth. The other has the potential for growth but you could take a big hit.

Computation is of limited use after a while in this situation. Decisions about markets often come down to a question of judgement – and it needs a person to make a call.

Yes, you can have algorithms that exploit differences for a while – but they will have to keep hunting because their own activity will start to close differences.

Which then takes us to the final quadrant – where the outcome is uncertain and the method is uncertain.

Should you study law or art or should you go to the local university or to one in a different country?

Should your company invest in marketing or in growth through acquisition? Should you start flexible working or rely on an office based staff?

Such questions have no clear answers – not ones you can get to on mathematical terms anyway.

Those situations need more than smarts – they need empathy, an ability to study situations and the skills to come up with a variety of solutions and decide which one to go with.

And they also need a big helping of luck.

The fact is that as you climb higher in organisations your smarts matter less and less.

It’s about politics and networks and deals up there.

And doing things differently from the herd.

And the one thing that’s certain is that you’ll be paid more to sort out an uncertain situation than a certain one.

p.s If you’d like to read an article about studying situations using ethnographic research methods take a look at How to study an organisation on my Articles page.