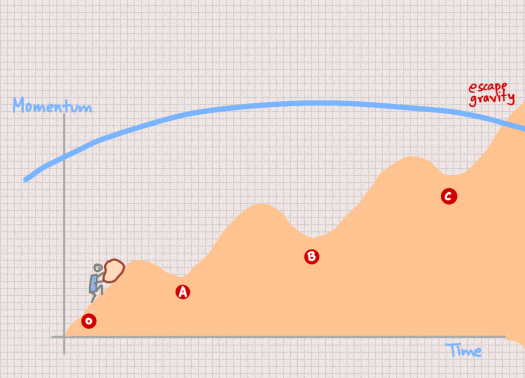 When you’re that successful, things have a momentum, and at a certain point you can’t really tell whether you have created the momentum or it’s creating you. – Annie Lennox

Have you ever felt, when watching and listening to someone, that something isn’t quite right?

That there’s a flaw – there might be a flaw in the assumptions being made about cause and effect.

For example, a lot of startups emerge in the U.S – big ones that become huge businesses.

Startups are a good thing – apparently. The value of an economy seems related to the number of businesses that are created there.

So encouraging more startups will lead to rising economic value.

And how do you grow a tech startup?

There’s a pattern to that – one signposted by flows of money.

In the beginning it’s like pushing a boulder up hill.

You use your own money, try to make it go as far as possible and get to a point where you have something that you can show people – the top of that first hill.

Now it’s easier for a while as you go downhill and then you reach the next stage – the one where you need to hire people and build something for the market.

That’s the point where you bring in the first set of investors.

That money helps you climb the next hill and life becomes easier again – until you need funds for the next big push and the one after that.

Eventually what you’re hoping is that all these money inflows will get you to a point where you’re self sustaining, where you escape gravity.

Which I’m sure is a great result for those people who get there.

Some people say that the problem with places other than Silicon Valley is that people don’t try and climb these hills.

The money is out there but people do pesky things like try to grow with their own money – not realising how much further they would go if they took some money from others.

Now, this is the model – the one that everyone knows about.

And it probably works.

Climbing all those hills, however, does seem exhausting.

I’m probably not making this clear but I’m still not sure whether the money is vital or not.

Maybe because there’s a story that I can’t get out of my head.

It’s the probably made up one of the islanders who found themselves hosting the allies during the last world war.

The allies built airstrips and the planes came and landed bringing food and clothes and good stuff.

Then one day the war was over and the planes and people left.

The islanders wanted the planes back with the food and loot so they flattened the ground for an airstrip, built a control tower in the trees and lit torches to mark the runway and got ready to welcome the planes.

If you have an idea can you tell if what you have is real or if you’re an islander building dreams?

There probably are some critical success factors – old ones too.

Like if you’re building a product to scratch an itch – it’s something you need then there’s a good chance others need it too.

If you’re building it because you think a market exists for it – then you might also want to get really good at discount sales.

Then there are customers.

The test of whether you have something worth having is whether people are willing to pay for it.

No customers, no business.

It’s like a Professor of public philosophy once said about working for money and working for the love of the work.

If you work because you love the work you don’t need any other reason.

Maybe that’s one way to check if your startup has a future.

Would you work on it whether you made money or not?

If you would then having money would simply be a nice to have.

If you wouldn’t then the chances of anyone else giving you money is also pretty low.

After all, why would someone else invest in something that you don’t believe in enough to back yourself?