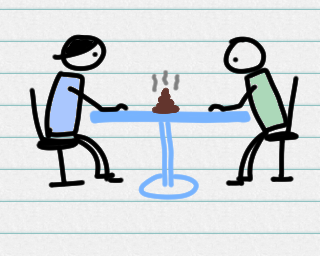 Okay, how do we sell this piece of shit?” – Steven Pressfield

I was listening to Steven Pressfield being interviewed on the Joanna Penn’s podcast, The Creative Penn.

You know Steven? The author of The War of Art, a writer of war books, and of the battles inside each of us.

It’s one thing knowing something and getting it. Really getting it…

Like realising that no one gives a shit about you.

It’s not that they’re unkind or self absorbed or nasty. It’s just that they are busy and have no reason to be interested in you or your stuff.

That makes it hard when you’re trying to do any kind of sales job.

Yes it does. Really.

Which is why the question you need to ask is the one that’s near the top of this post.

Selling matters. It’s the one thing that tells you whether what you’re doing is working or not.

If it isn’t selling, you’re doing it wrong.

Unless you are unfortunate enough to be an artist in the Soviet Union.

The New Yorker has a piece on the writer Sergei Dolatov who was one of many artists simply not allowed to publish their work behind the iron curtain.

What he had would have sold if it was allowed to sell and it did when it was, when he moved to America.

The problem is that no one is listening.

And the solution is simple. Simple, but not easy.

Which leads back to us sitting at a table looking at a steaming pile and asking ourselves how we can sell it.

There are two roads we can go down now. We can be “sales people” and try to sell. Or we can be human and try to help.

That’s an attitude you see very often from people new to the job. I’ve got this thing. Now how can I tell everyone to come and listen to me?

Now you know that’s not going to work. What you’ve got to do is think like the person who might need what you have.

Or even better, listen to them. Not talk to them but listen.

Listen to what they have done, how they act and talk and frame their choices. People make decisions all the time.

If you can listen and learn how they make decisions then you can make it easier for them to see what you have, understand what you have and make a decision.

For example, I saw a LinkedIn profile recently that said “I’m a management consultant and entrepreneur”. The author then added that he hated those terms. He was actually a systems thinker. But saying that wouldn’t get him any jobs. That’s someone who has asked and answered the question.

A question that’s worth asking again and again about everything you do.