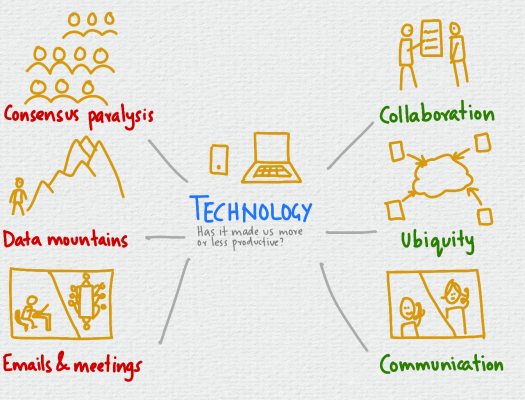 Every generation probably feels that it is living through the most profound changes that have ever happened since the dawn of time.

From the printing press to the industrial revolution, from world wars to the world wide web, things have changed – and the most visible part of that change is the technology that enables the modern world and, in particular, the technology that affects how we live and work.

So, is it helping us or not? Are we more productive or not?

So, take how modern technology has transformed the world of work, making it easier for us to collaborate, have everything everywhere and communicate with others. How are these working out in practice?

Is it easier to work with others?

Many new companies and startups are delighted by how easy it is to collaborate with others on projects now.

Take Google docs, for example. We can share and work on a document at the same time – something impossible in the days when we had to write a draft, send it to someone else, wait for comments, rewrite and repeat the process until everyone was satisfied.

Now we can work together quickly, come to a consensus and publish anything we want pretty fast.

So why is that anything less than perfect?

First, if two of us can collaborate, then so can others. If it’s easy to have five, ten, fifteen people all providing their input, then we can quickly get locked into a cycle of never ending comments, suggestions and changes.

Procurement is one area where such delays can increase delays massively. It takes much longer to get five buyers to agree than two and the trend towards decision by committee slows things down and doesn’t necessarily improve quality.

The second reason is that when it’s quick and easy to collaborate and produce something, the result is probably going to be of less quality.

Is it good having everything everywhere?

Dropbox, Google Docs, Office 365 – all these tools have changed the way in which we store information – taking us from a world of USB drives to being able to work on any computer anywhere.

It’s also meant that we can store everything – never lose a thing.

And so many of us pile on the gigs of storage, like the pounds we put on every year since college. It’s gradual, but it grows and, after some time, it shows.

Not every picture we take is worth saving. Not everything we write is worth preserving.

When we had limited space, we had to choose what to keep. So what we had was worth having. Now we have everything, but it’s hard to find what matters.

At some point we’ll probably wake up to the need for a digital diet. Just because its cheap to keep everything doesn’t mean we should, because it makes it more expensive for us to find what is important.

We never apologise for sending a long letter these days

Blaise Pascal, the French mathematician and philosopher is credited with writing a long letter with an apology for not having had the time to make it shorter.

When we had to write to each other, we probably took care to express our thoughts clearly and concisely so that we wouldn’t have to fix it weeks later when the replies came back.

With email, we can write to someone so quickly that we no longer need to think about our words and how they might be interpreted – after all we can follow up with a clarification immediately.

And that means we probably take less care – and it shows up in the increased number of emails we need to send to get things done.

It’s easy to communicate – and because it’s so easy we spend more time doing it. It’s also easy to get a meeting in the diary – and that’s why more managers spend their time in meetings than ever before.

But – sitting in a meeting and sending emails is not work – it’s stuff that gets in the way of doing real, useful work – like thinking about strategy, improving operations, recruiting or expanding.

If we all got together less often and interrupted each other less we might get more done.

The problem isn’t technology… it’s us

What we come back to is that the way use technology better is to understand how we humans use stuff. Make it easy for us and we’ll do it more – but something else suffers at the same time.

Technology can help us – but it can also hinder us.

To get the most out of it, we need to remember who is in control – it or us.