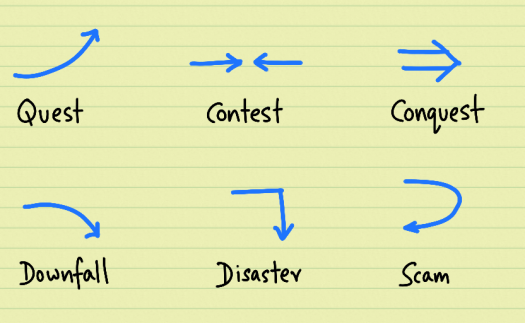 How do people in an organization get a sense of shared meaning and understanding?

This collection of short stories helps a person understand the culture and essence of what an organisation is – which emerges out of the actions, behaviour and justification of its members.

So, what kind of stories work?

There are six basic plots that have survived over the ages.

The quest is a story where an individual or group set off, face challenges and setbacks, and eventually succeed and find fame and fortune.

This is often the story of individual entrepreneurs – Branson, Zuckerberg and so on – they all started with ambition or an idea and then moved heaven and earth to make it happen.

The contest is a struggle between two forces – often good and evil. Who is good and who is evil depends on your point of view.

This is often the story of takeovers and mergers and boardroom battles. Take Proctor and Gamble, for instance.

A battle has been waged between the activist investor Nelson Peltz and David Taylor, the CEO, who have different views on how the $235bn company should be organized.

The two sides may have spent over $60 million between them on the campaign and, for the time being, the CEO and Board may have won – supported by the large numbers of small shareholders.

But Peltz may be back – the institutions back him, after all.

The conquest is a story of winning through force and power – but then being seen as saving the day.

He was given power at GE, at the time a moribund conglomerate with disparate interests. He instituted dramatic, even draconic measures.

He sold off business units in markets where GE wasn’t number 1 or number 2 and insisted that the entire organization be structured around performance and competitiveness.

The result was a re-energized, re-focused and more driven organization that is now once again a force in sectors ranging from turbines to finance.

The downfall plot is one where a successful person or organization slips from grace, primarily because of their own shortcomings.

This is the story of the financial crisis. Once proud financial institutions were sucked into the frenzy of lending money without underlying assets – greedy for commissions and growth.

In the UK, the government had to rescue institutions such as Lloyds, RBS and HBOS – banks with a hundred year operating history, and they are still recovering from that period.

The disaster story is different from downfall – because the events that cause failure are outside the person or organization’s control.

The classic story here is the impact of the internet.

Blockbuster, HMV, Staples – all the high street and big box stores that flourished in the late part of the last century and thought this dinky little computer toy thing called the internet would never catch on are now part of history.

In the scam, the main characters turn out to be not what they seemed – they were either incompetent or foolish, or they were hiding something that then came out.

Bernie Madoff, a one time darling of Wall Street, was exposed as a fraudster after creating the largest ponzi scheme in history – nearly $65 billion.

There is no shortage of stories around us – but the ones we pick and choose to tell and re-tell will create the common meaning and understanding that is shared by people in an organization.

Stories have more impact than almost any other form of communication – we seem hardwired to listen and learn from them, right from the time we are children.

Choose the ones you tell carefully.