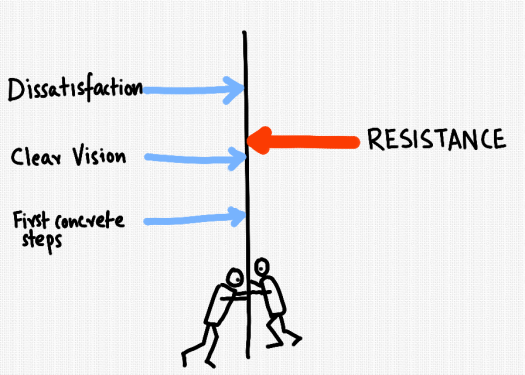 Some people want to change the way things are done, some people like things the way they are, and some people aren’t really bothered and are just waiting for the working day to end.

Changing the way things are done is not just about saying that there is a better way and so obviously everyone should do it.

For example, if you want to try and be more energy efficient, you could just set the room temperature controls to 18 degrees C, lock the panel and leave.

You will, however, get complaints. Lots of them. From people that are too warm, too cold or liked having control. Some enterprising ones will work out how to hack your controls or subvert the temperature sensors.

When it comes to small or large programs, whether it is choosing to lose weight or changing your entire IT system, what are the factors that will make your program succeed or fail?

It turns out there is a formula. David Gleicher created the first version and Kathie Dannemiller made it easier to understand and use.

Kathie’s version says that three things must be in place for change to be possible. These are:

Working against these factors is R: Resistance to change.

Or in words, the product of the three factors needs to be greater than the resistance to make change possible.

It’s a nice formula, but there are a couple of problems with it.

First, can it actually be used like a formula? What units do you use to measure D, V and F, and then what do you actually multiply?

Someone needs to do some dimensional analysis, or in simpler words, work out how to convert the factors to a common unit (like litres or centimetres).

But that would probably be a waste of time. Instead, a more useful representation may be to use a force field framework as shown in the image above. There are driving forces that move you towards a goal and hindering forces that block movement.

If you have more forward forces than backward forces, you are probably going to move towards your change goal.

The second problem with the formula is that it assumes you need to know where you are going and what you should start doing in order to change.

That is not necessarily the case. The only factor that is really necessary is Dissatisfaction with the status quo.

Instead of Vision and First steps you might have options and experiments. Jason Little has an interesting blog post about experiments here.

You might try a number of things out, see which ones face more or less resistance and work towards an approach that makes you happier (or less dissatisfied).