The first few explanations of blockchains that come up when you search for the term seem incredibly complicated.

So, what is it and why should you care? Here are some notes to help.

Blockchain is the technology that makes the virtual currency Bitcoin possible.

It has created the ability for people to create a currency and buy stuff with it without going through a bank, completely bypassing the existing financial system.

For example, if you want to agree a contract with someone, buy a house or just pay for a snack, you are agreeting a transaction with someone else.

To seal the deal, you will have to hand over some money, or sign a piece of paper. That is the evidence the transaction took place.

The records of that transaction are kept in banks, land registries and big paper files. When you want to transfer money or property, you ask the bank to send money or hand over the deed to another person. 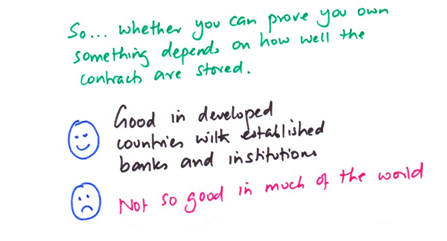 The problem starts when record keeping is bad or can be hacked. If you live in a country where land records can’t be found, or can be lost easily, then you could lose your house.

It’s the same with many other transactions: contracts can be faked; bank accounts can be hacked and the amounts modified.

So the key to keeping things safe is recording them in a safe place.

So, if you could take the information that you want to keep safe, create a way of encrypting it so that it can’t be changed, store that in a place where it can’t be deleted and be able to always prove which piece of information is right and which is wrong, then you would have a more secure system.

In essence, this is what Blockchain does. It creates an unbreakable code that is updated with careful rules that mean that information is much safer than before.

Some people think that this will change everything about the way in which we transact with each other, from money to contracts and more.

Others think that this is such a radical change which creates an entirely new way of recording what you own that it could take years to be accepted.

Over 2,000 years ago, people used clay tablets and sticks to record who owned what.

Blockchain pretty much helps do the same thing now.

One Reply to “What is this blockchain thing that people are talking about?”