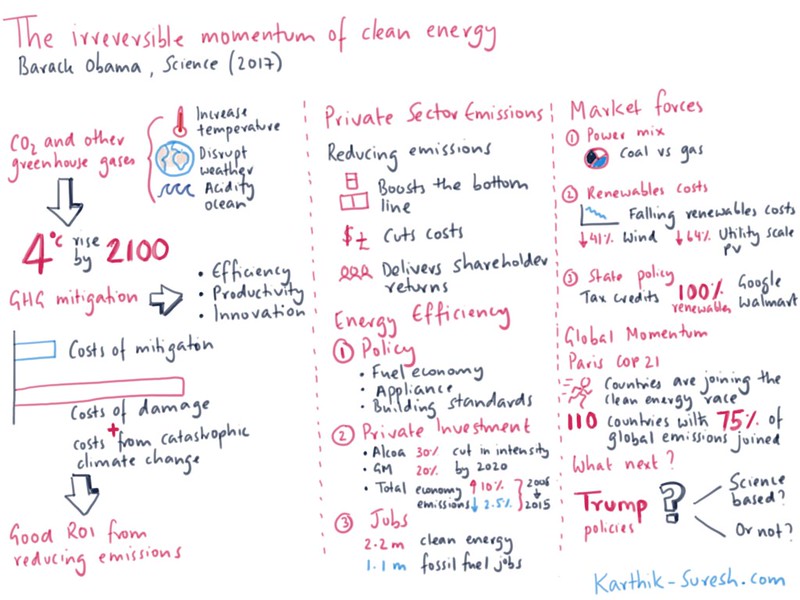 The irreversible momentum of clean energy (sketchnote)How can President-elect Trump make the right policy decisions on clean energy? An article by a sitting President may help.

President Obama is thought to be the first sitting US president to author an article in the high profile peer reviewed journal Science.

In the article, President Obama argues that the global momentum towards taking action on climate change is now irreversible.

The science is clear but opinion is still divided

Some policy makers and influential stakeholders still do not agree, however, and in the short term that continues to be a problem for a  number of economies, not least the United States.

Climate change policy could slow down or be reversed under a new administration if staffed by climate change skeptics.

This is not a good economic move. Taking action on climate change is good for business.

The United States has grown its GDP by 10% since 2008 while emissions from the energy sector have fallen by 9.5%.

Ignoring carbon pollution, on the other hand, could result in economic damages annually of 4% of GDP, or between $340 – $690 billion lost in federal revenue every year.

President Obama’s administration has encouraged fuel economy, appliance standards and building standards that will cut over 10 billion tons of carbon by 2030.

Major corporations are setting challenging targets. Alcoa and General Motors are working to reduce their energy intensity by 30% and 20% respectively by 2020.

The energy supply system is being transformed

Coal is being replaced by natural gas as the primary method of generation. Low cost gas is displacing coal and, despite problems with methane leakage, is a cleaner generation technology.

Battery technology could help squeeze even more power out of existing and new installations.

Major companies such as Google and Walmart are committing to sourcing 100% of their energy from renewable sources by as soon as 2017.

For the first time the United States and China, along with other major economies, agreed to set out ambitious climate policies that would be transparent and accountable.

Delivering on this commitment would increase the changes of limiting temperature increases to under 2 degrees by 50%.

Countries will set national policies and companies will respond by innovating, creating new technologies, jobs and export markets for clean products and services.

Over $1bn has been committed by investors to support clean energy breakthroughs.

Countries that pull out now are going to miss out economically.

What will happen next?

A new policy direction will emerge under a new administration.

Will it be science based, building on the global consensus on the evidence for climate change and the need for action?

Or will it roll back policy and stop funding for clean energy and technology?

We will know more over the next year.

The long term trend, however, for global policy over the next few decades is unlikely to reverse as countries move to creating low carbon economies in order to reap the benefits and avoid the damages from climate change.