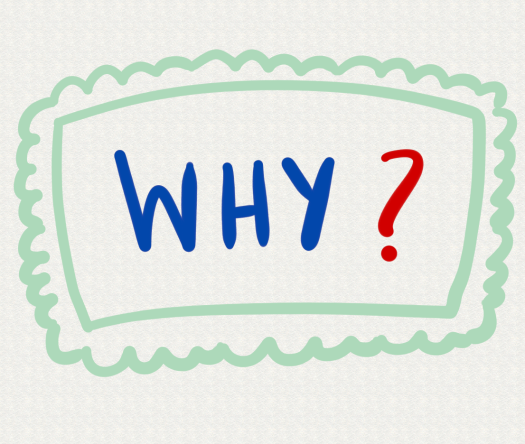 He who has a why to live can bear almost any how. – Friedrich Nietzsche

“Why?” is a powerful question. Maybe that’s why children use it so much. They know instinctively that they shouldn’t accept things at face value, that they should question what they see and hear. It’s a survival mechanism – to be wary of everything. To only accept that which you are sure won’t hurt you.

As I read papers and books I look at statements and note which ones have references. And then I wonder about the nature of references. If you slow down and really read what is on the page, are you sure that what you’ve written accurately reflects what you read?

Words are slippery things. They come loaded with assumptions and contexts and unspoken ideas. It doesn’t help to use more words – that often confuses things even more. A mission statement that you write, one that you think is crystal clear may thoroughly confuse someone else. A statement by itself is rarely enough to make sense of a particular situation.

But you can’t always check everything, can you? Or perhaps you can – that’s Wikipedia’s policy. Nothing in there that’s not referenced, where you haven’t got a published source. That’s the idea of an authoritative source. Your own opinion doesn’t count.

But how do you know that your authoritative source has got things right? Well, that’s the idea of peer review – that what’s being said has been looked at by someone else who’s said it’s all ok.

But what if the thing that’s being looked at is a few levels of abstraction away from the real thing? How do you compare the abstract idea with the real-world data that’s been collected unless you can see what happened?

That’s the idea of recoverable research, your ability to show what you did rather than just the results of your work. It’s the recoverability, or at least the ability to go through what was done that adds some credibility to the process.

Now, all this seems like hard work but it’s not really. It was solved a long time back using ideas like literate programming. You think stuff and you do stuff. People see what you do and that’s good. But it’s better if they can also see why you did what you did and why you thought what you thought.

Better for the world of knowledge anyway.

But perhaps the most important thing is this.

It’s easy to fool yourself.

It’s easy to assume that you know more than you do.

But if you sit down and try to write down why you have done things the way you’ve done them you’ll have a record of your thinking.

One that will be of use to others.

Or, more importantly perhaps, useful one day to yourself.