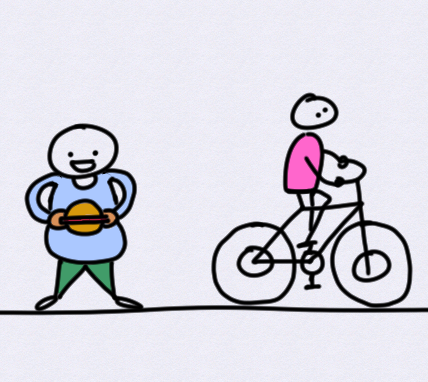 Early to bed and early to rise, makes a man healthy, wealthy, and wise – Benjamin Franklin

I grew up with this poem rolling around in my head. We were early risers – a cultural imperative for the community I grew up in.

I saw a post recently that talked about how people who ride bicycles are bad for the economy – because they’re healthy and don’t buy junk food and spend less on medicines. It’s better to have a nation of consumers who go out and spend a lot because that’s what keeps economies going.

I don’t quite know what to make of this. On the one hand, it’s more complicated than that. Some of the cyclists I know spend a lot of money on their machines. It’s a big business, the one that helps you move around.

There’s something in here about capitalism and consumerism and the fact that these approaches have very successfully helped to improve the standards of living of millions of people. Innovation in this space has changed all our lives, possibly for the better.

Then again, consumerism exists because many of the products in the world are made in a country that has a problematic relationship with freedom. But it’s doing well unlike the other well known union that fell apart.

I think it’s hard to know what the right thing to do is these days.

Should you work hard and save and try and live within your means?

When you do, people who stretch themselves and buy a bigger house will end up having a much larger asset than you have.

The website Monevator has covered this several times in the last decade or so and it really all does come down to mental models.

Let’s take money for example. How much do you have.

If you bought a house twenty years ago that’s now appreciated in value by several hundred thousand pounds – you don’t have any more money in your pocket. But you do have something.

If you sold up, you’d have cash to spend but the cash is also not worth very much – there’s too much of it around.

What does this mean in practice? The excess returns you make in property get eaten away by low interest rates if you make the switch to cash. If you never sell your property or borrow against it, however, you don’t get the benefit of the cash. You don’t have any more than you did at the start because the house itself doesn’t get any bigger.

The wise thing to do is to have a mix of options – some property, some shares, some cash. But if you’ve got cash you’re looking enviously at the returns on property. If you’ve got property you’re looking at crypto and wondering what you’d have if things had increased 119,000% for you. There’s always someone who has it better.

Knowing what you know now, would you have done anything differently?

I don’t know. The thing is that things change and it’s really hard to be right about anything.

Buffett talks about how it’s only when the tide goes out that you can see who’s been swimming naked.

These days the government rushes up to hand out towels and swimsuits which kind of makes it irrelevant what you’re actually doing. If you’re part of their gang, of course, everyone else is left to fend for themselves.

I think someone worked out that it was better to let the good times roll and then pay a little to pick up the mess rather than try and manage things sensibly from the start when it came to the economy.

Many of us have learned instinctively that we have to be careful, to hoard our resources in the event of a famine.

Is this the wrong approach to grow an economy? Is it better to consume and use as many resources as we can?

I am left with more questions than answers, I fear.