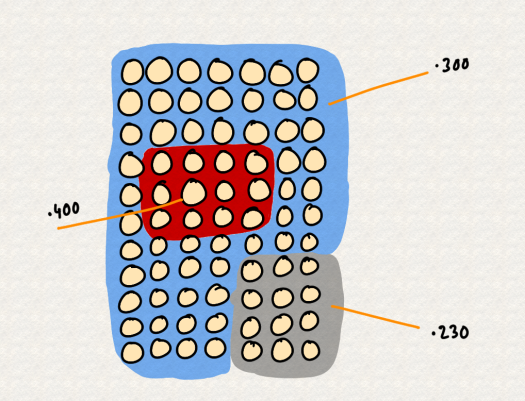 The hardest thing to do in baseball is to hit a round baseball with a round bat, squarely – Ted Williams

Baseball is a game of statistics, one of which is a player’s batting average.

The batting average is the ratio of times a batter hits the ball and gets to at least first base to the number of turns they take batting against a pitcher.

Getting .400 or hitting the ball 40% of the time is considered a standard of excellence and was last reached in 1941 by Ted Williams of the Boston Red Sox who also wrote a book called “The Science of Hitting”.

Warren Buffett is a fan of the book and talks about an image from the book helps him think about investing strategy and the importance of knowing your sweet spot – and how it can work for anything else you do as well.

The science of hitting

Ted Williams writes in his book that his “first rule of hitting was to get a good ball to hit.”

A strike zone is around 7 balls wide and 11 balls tall, giving you a grid of 77 locations.

Some of those locations sit in a happy zone, a sweet spot – a place where you know you can swing and bat .400.

Outside that you’re going to do less well, perhaps hit the ball 30% of the time.

And then there will be an area where your hit rate drops, where you only get a .230 average.

The difference between getting a high average and a low one is knowing when to hit.

Do you swing at everything?

How often have you heard someone try and chase a trend?

They’ve heard about an opportunity that someone else has capitalised on and want some of that for themselves.

Should you get involved?

Warren Buffett talks about how the problem with baseball is that you do have to swing at something eventually.

You don’t have that problem with business.

You never get sent off for not swinging.

You can wait, pitch after pitch, until the right ball comes along, right in your happy zone, for you to take a swing at.

For example, let’s say you’re a building contractor and have been pretty successful at that, should you diversify into media production?

After all, everyone is making money on YouTube, aren’t they?

It isn’t a yes or no answer – you need to define your own strike zone and see if you’re playing in your happy zone or not.

For example, I’ve seen this done well where a contractor uses YouTube to create content that shows how they work, give a prospective customer a glimpse behind the scenes.

Others have created entirely new channels, completely different from their main work and have had thousands of views.

As individuals, they have decided whether they go into an opportunity or not – and know whether the result is good or not – given the standards they have for themselves.

And you do have to try things to see if they work or not, you have to experiment or risk being left behind.

But most of the time you should probably wait to get a good ball to hit.

Learning to say No

Years ago I went to a shop that I used to go to a decade before that – the owner was a friend of the family and his children were now in charge as shop managers.

I lived in a city and while I Was in the shop my parents asked the managers, jokingly, if they would like to expand and sell their cloth in the city and if I could help.

The manager smiled and nodded yes and said “no.”

That was a little confusing so we asked again and got the same “no.”

No explanation, just a smile and a flat decline.

And looking back at that, it seems like a sensible thing to do – the kind of thing experienced people do who have learned from a young age how to run a business.

Many of us are afraid of coming across as unhelpful, unwilling.

You need to say no to everything that isn’t in your happy zone, in that place where you know you can hit hard and hit well.

Most of us would be better off if we stuck to a few things and did them really well rather than dissipating our energy doing lots of things just fine.

It’s okay to say no to the things you know you can’t do that well and it’s just fine to turn down everything that’s outside your strike zone.

The wider your zone, the less successful you’ll be – the more chances you give a pitcher to get a bad one past you.

But when you say no to everything except the stuff that you’re good at, then you’re going to be one of the best out there.

And when you’re the best you’re giving people a reason to work with you.

Let’s look at how that works in the next post.